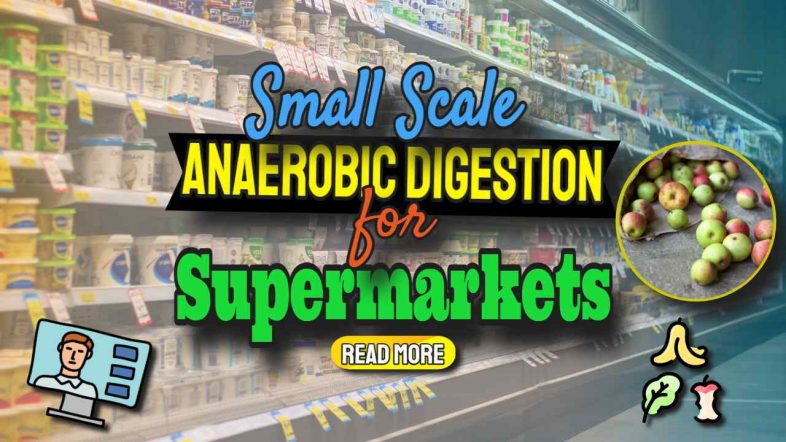 It is true that a handful of the UK's largest and most successful supermarkets generate biogas from food waste to power their operations. They save money on trash disposal fees and benefit all of us by lowering carbon emissions, which are jeopardising life on our planet as we know it.

However, an increasing number send the food waste which they have not been able to give away to the needy, to food waste biogas plants, as described in the following section

We found the following two examples of UK supermarkets that send food waste to district anaerobic digestion facilities for centralised processing, rather than building and operating these plants at their stores.

Waitrose, a prominent UK supermarket, is saving enough carbon to take a thousand cars off the road forever – all by preventing food waste from going to trash. Food waste is collected from one hundred of its stores and treated by Biogen/ Greenfinch, a specialised anaerobic digestion operator.

The biogas plant where the waste is processed generates enough electricity to power around 200 houses on a continuous basis from the waste.

Iceland, a UK grocery operator, has claimed food waste reductions of about 2,500 tonnes (23.2%) in the previous two years through community projects and anaerobic digestion.

The statement comes a year after Ben Elliot, the food waste champion at the Department for Environment, Food and Rural Affairs (DEFRA), called on companies to ‘step up to the plate' and push food waste reduction initiatives.

Iceland has taken the ‘target, measure, act' method outlined in WRAP and the Institute of Grocery Distribution's food waste reduction roadmap. In accordance with the United Nations' Sustainable Development Goal No. 12. 3, Iceland has pledged to reduce food waste by 50% across its activities by 2030.

When the grocery store closes its doors at the end of the day, where does all of the food that has reached the end of its shelf life go? Is it truly essential to discard it, or may it be put to better use?

What if it might assist a shop in becoming energy self-sufficient? In the United Kingdom, an increasing number of supermarkets are generating their own electricity from leftover food waste, allowing them to operate independently of the national grid.

Observing the Waste Hierarchy in Order to Use All Edible Food

Of course, no one is suggesting that all unsold store food be converted to biogas. These companies want to minimise the amount of waste that ends up in landfills. As a result, most, if not all, UK food stores make it a point to donate to their charitable partners all of the food that is safe to eat. It is given to charity by volunteers, who then distribute it to those in need.

Some of them may give food to zoos and animal rescue organisations to feed the animals in their care, in addition to replenishing their local food banks.

Biogas is mostly made up of Methane Gas

Biogas is primarily made up of methane, which is a powerful greenhouse gas if discharged into the environment uncombusted. Biogas is produced from organic sources that are already part of the carbon cycle and emits no carbon when consumed, unlike natural gas, coal, or oil, which release carbon that was previously stored underground.

Biogas power generation may be a lifeline for rural places in desperate need of electricity, not just for supermarkets and food stores. Biogas is more dependable than either wind or solar power, which can be intermittent depending on the weather. Furthermore, anaerobic digestion does not require the use of food waste to function. Manure and other agricultural wastes may be used to make biogas, which can be used to generate electricity. 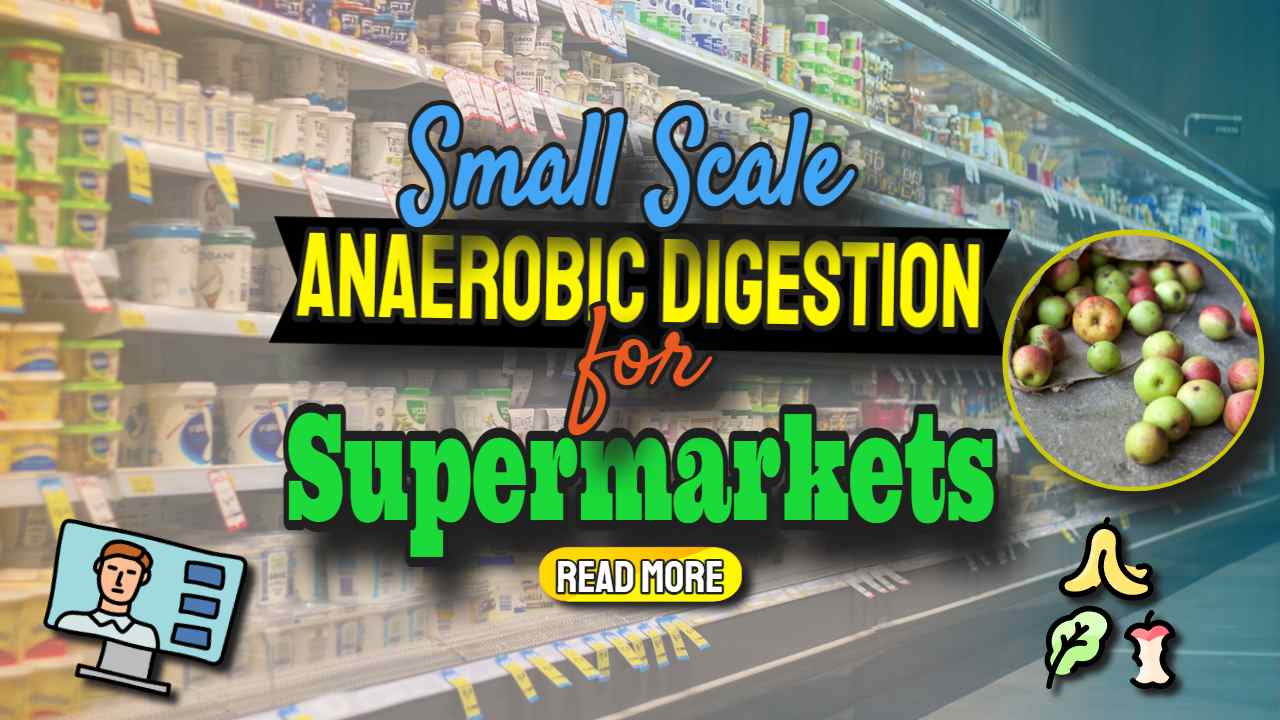 Now that you know why and how grocery stores use anaerobic digestion, we hope you'll continue reading to discover more about how supermarket biogas is made and read about examples of UK grocery biogas plants:

Our original article (first published in June 2016) is still very relevant and is reproduced below: 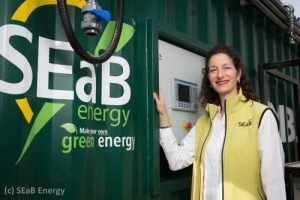 Installng small scale anaerobic digestion for supermarkets is a recent idea. But, with many large supermarket operators now either having on-site digesters, or using off-site AD facilities, it makes real sense.

Small scale can be taken as the description for all anaerobic digestion plants in sizes ranging from a single dwelling, up to a community digester. Most local supermarkets produce the same quantities of food and other organic wastes that they are no larger than a community scale digester.

In the area of “small-scale” there is scope for much wider use of anaerobic digestion. So, in this article we report upon a new type of smaller scale AD Plant that seems to be emerging. “The containerized biogas plant or digester”.

New! Watch our video definition of Small-Scale Anaerobic Digestion below, if you have any doubt what these plants are:

We are featuring small-scale anaerobic digestion plants, installed at the back of supermarkets. Anaerobic Digestion for Supermarkets can be very environmentally sustainable, and may be hardly noticed by the public.

To have one now operating in Portugal, with no doubt more to follow, is a big step forward for supermarket biogas production. 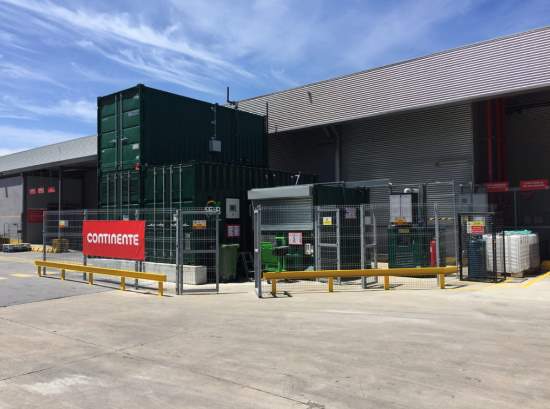 The new breed is biogas plants designed to digest the organic waste produced by a single supermarket on-site, at the back of the store. They are based upon container units that house the bio-reactor tank (or tanks), the biogas storage, and all the Mechanical & Electrical devices and electronic computer control systems.

This is a model for biogas energy production which can immediately be used to power the supermarket's own energy needs (by electricity generation), and provides also an opportunity to use the CHP energy in cold weather. for space heating of the supermarket as well. Put that together with the absence of fossil-fuel consuming energy use in “transport miles”, for the organic waste to be taken to a biogas plant, and the availability of staff on-site to look after the digester itself and this must be winning, and very highly “green”.

Please note that there is no need to click on the link described in this video because you are already on the page it would take you to!

It is a green solution because by reducing carbon emissions, climate change will be reduced and thus this is a sustainable solution to the problem of waste food from supermarkets.

The project we refer to is the first of its kind, and has been developed by SEaB Energy, as described in their Press Release below: 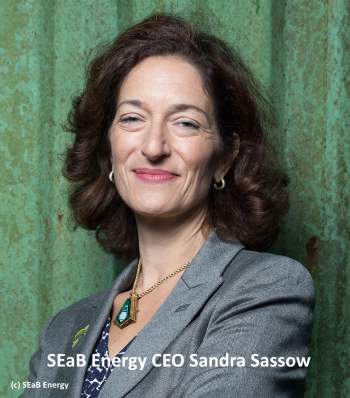 SEaB Energy, one of the UK’s brightest innovators of waste to energy technology, has fully implemented its containerised power plant at a hypermarket owned by Portugal’s largest retailer. This is the first time that an anaerobic digestion system, that converts inedible food waste to energy, has been installed at a supermarket site anywhere in Portugal.

The strategic partnership agreement, signed with Modelo Continente, part of the Sonae Group, was conducted through SEaB Energy’s Portuguese agent, Biowaste SA. The conclusion of the deal has resulted in SEaB Energy’s ‘Flexibuster’ technology being installed at Continente’s hypermarket in Gaia, located in the south of Porto.

SEaB Energy’s patented ‘Power in a box’ small-scale power plant is now fully operational and will deliver an immediate revenue stream for Modelo Continente as well as having a significant positive environmental impact to the site.

“This is a ground breaking deal for the adoption of small-scale renewable energy systems within the retail sector – and not just for Portugal but for Europe as a whole. It also demonstrates Continente’s continued commitment to adopting sustainable solutions that also improve their operational performance and enhance their environmental credentials.”

The Flexibuster will convert approximately 600kg per day of inedible supermarket food waste into energy that will generate around 80,000Kwh of electricity, as well as 180 tonnes of digestate fertilizer per annum. The electricity will be used on site whilst the fertilizer will be sold on, creating another valuable revenue stream for the supermarket. 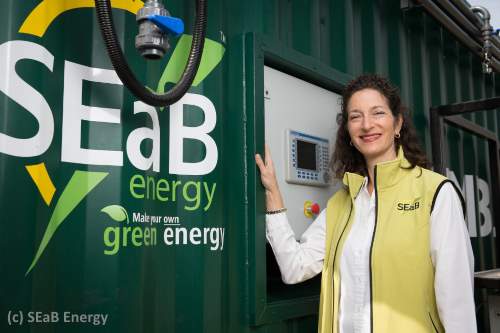 The total offset savings for the first year is projected to be around €27,000 which includes income from energy generation and cost savings from the elimination of waste transport and landfill costs as well as other operational expenses.

Modelo Continente is a pioneer in the adoption of low-carbon, environmentally-friendly measures that reduces its demand for energy and includes LED-only lighting in all new stores, installation of over 112 photovoltaic power plants and the use of more efficient heating and cooling equipment. The company also has a strong focus on resource recovery including the recycling of product and transport packaging and the implementation of bins at its stores so that consumers can recycle items such as batteries, clothing, consumables and electricals.

All images are copyright with “All rights reserved” by SEaB Energy.

Small Scale Anaerobic Digestion isn't by any means just confined to supermarkets. In the sections which follow we discuss other small-scale AD installations.

“The interest for small-scale digestion is not to have to invest in large facilities,” explains François Xavier Dumur, Novatech Project Manager. “Micro-scale digestion allows the autonomy of the system by supplying the digester with the farm products.” via biogasworld.com

The agricultural sector should see the significant deployment of farm-scale AD plants in the next decade. Digestate should be returned to land and it makes sense to site plants on or close to farms. AD can reduce odour emissions from livestock slurries and manures, plus nitrate and phosphate run-off from storage and spreading of undigested manures. But the digester must fit the farm.

Britain's farm manures have a methane potential of 10bn kWh of thermal energy per year. But, if not digested, the estimated GHG potential is 3m tonnes CO2 equivalent.

Hence, AD should be more widely adopted on livestock farms – with farm-scale plants. Germany recognizes the value of AD for on-farm pollution control and nutrient recycling, with enhanced incentive payments for smaller on-farm slurry based digesters. via recyclingwasteworld.co.uk

Small-scale biogas reactors are also often designed to produce biogas at the household or community level in rural areas. The airtight reactors are filled with animal manure from the farm. Kitchen and garden wastes can also be added and toilets can directly be linked to the reactor for co-treatment of excreta.

A biogas reactor is an airtight chamber that facilitates the anaerobic degradation of blackwater, sludge, and/or biodegradable waste (e.g. It also facilitates the collection of the biogas, a mixture of methane (CH4) and carbon dioxide (CO2) produced in the fermentation processes in the reactor. The gas forms in the slurry and collects at the top of the chamber, mixing the slurry as it rises. The pressure exerted by the rising gas can be used to transport the gas to the collection vessel or directly to where it is going to be used.

The digestate is rich in organics and nutrients, almost odourless and pathogens are partly inactivated. via sswm.info

Anaerobic Digestion for Supermarkets – A Conclusion

Anaerobic digestion on supermarket sites makes use of their food waste, and the power produced can power the supermarket.

Small-scale anaerobic digestion plants on farms also help reduce the GHG emissions from the storage of livestock manure. The recovered biogas replaces oil, kerosene or wood as fuels and in doing so reduces the release of particulates and toxins into the atmosphere.

As a consequence, their detrimental effects on human health are reduced, while the reduction or elimination of pathogens during the process can lead to improved human health as well as animal health and productivity.

These small scale anaerobic digestion plants located on farms can usually be integrated into a wholly sustainable farming system for the reduction of pollution to land, air and water. via iea-biogas.net

For shops, they perform an equally important role in supplying power 24/7 to run the shop. 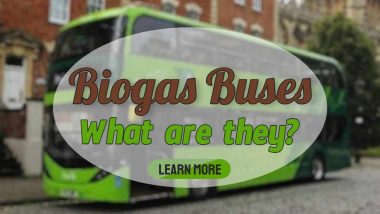 Biogas Buses – What are they? and How are they Environmentally Friendly?