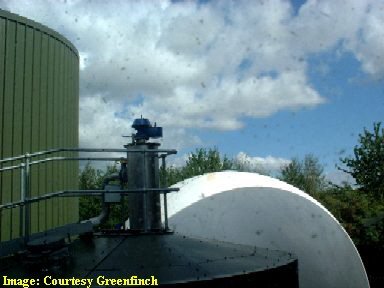 A growing interest in alternative energy and specifically, biogas and anaerobic digestion, is fuelling the construction of biogas digester facilities, which typically produce methane gas through bacteria-based anaerobic digestion (fermentation) of animal manure and other organic wastes.

The resulting product is, barring the need to remove impurities, the same as natural gas and can be used in the same ways.
[hr]
In this Biogas and Anaerobic Digestion section we have included the following article pages:
Uses of Biogas
How to Make Biogas
Biogas Composition
What is Biogas?
What is a Biogas Power Plant?
[hr]

Biogas and anaerobic digestion production facilities are easy to spot from a distance with their large covered tanks and dome shaped gas-holders. Regular monitoring of the physical conditions within those tanks is essential because foam or crust formation can slow down the digestion process, and reduce gas production rates. Therefore, there are advocates of sight glasses which are often installed near tank work platforms. This is where operators have a vantage point to make observations and to ensure reliable and well mixed digestion by watching carefully for changes going on inside the tanks. If problems are seen the plant operator will be able to set mixing devices at optimum settings to prevent foam and crust build-up. Ensuring a fast response to any unwanted changes translates into significant biogas production efficiency improvements. In addition, early detection of irregularities helps ensure that situations do not occur within the reactor tanks which could later lead to unsafe operational conditions.
[box type=”alert”]Since the methane produced is a combustible gas, and can form an explosive mixture with air, it is essential that great care is taken at all times at biogas plants, to meet a high standard of health and safety procedures.[/box]

Biogas Digester: The Heart of the Anaerobic Digestion Process

The Biogas Digester is at the heart Anaerobic Digestion (AD) Process, and within the digester fermentation takes place to produce methane gas (biogas), and a liquid and a solid fibrous “digestate” is produced as the residue after digestion has taken place, which is then removed from the digester.

Digesters are completely sealed vessels which are covered and sealed. Most are insulated and heated, and the digester is a recognisable at most large biogas plants as a large tall, usually vertical sided, circular tank, with an access ladder and a number of pipes leading to the top where there is also usually a pedestrian access way and handrail.

The above applies to the most common wastewater treatment works AD biogas digester plants, to agricultural installations (other than lagoon type plants), and the majority of low solids and liquid-phase high solids AD plants used in for Municipal Solid Waste biogas production.

Biogas plant digesters of this type can usually be spotted very easily when you see them by the characteristic pairing of the digester with the biogas storage tank which acts like a traditional town gas ‘gasometer’, and is usually elegantly curved or “globe” shaped. Many visibly expand and contract over periods of days, to accommodate the changing volume of biogas present. But is is their spherical shape which is most noticeable, making most of them landmark features wherever they are built.

There are such a wide range of biogas and anaerobic digestion process technologies which contain biogas digesters, that there are many exceptions to the above rule, with some of these being as follows:-

Within a biogas digester, where the biomass will usually be present on average for between 4 days and 3 weeks, according to the process requirements, heating and mixing takes place.

Some digesters are mixed mechanically with blades which turn, others avoid the presence of mechanical parts in the digester which are hard to maintain, by pumping.

The action of mixing and heating with the digester allows the bacteria in biogas and anaerobic digestion plants, within the digester, to come into contact with the feedstock material, which provides food for the bacteria to multiple and convert the complex organic compounds into much simpler mostly soluble compounds such as sugars and starches, which then react in further stages resulting in methane gas which comprises about 60% of biogas.