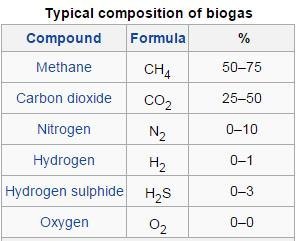 The Composition of Biogas

“The composition of biogas varies depending upon the origin of the anaerobic digestion process. Landfill gas typically has methane concentrations around 50% [with carbon dioxide being the other main gas present]. Advanced waste treatment technologies can produce biogas with 55%–75% methane, which for reactors with free liquids can be increased to 80%-90% methane using in-situ gas purification techniques.”

“As produced, biogas contains water vapor. The fractional volume of water vapor is a function of biogas temperature; correction of measured gas volume for water vapor content and thermal expansion is easily done via simple mathematics which yields the standardized volume of dry biogas.”

“In some cases, biogas contains siloxanes. They are formed from the anaerobic decomposition of materials commonly found in soaps and detergents.”

The following link provides a useful source for the conversion factors and units used in the energy industry:

The digester is covered to contain odours, maintain temperature, keeps air out and to collect the gas. Fixed covers are more usual than floating covers. During normal operation, there is a space for gas collection between the cover and the liquid surface of the digester contents. The cover of a digester has certain unique features that the operating staff must be aware of, for example, how the variation in pressure and the level inside the digester may affect the cover. The biggest danger associated with the operation of fixed cover digesters occurs when the pressure relief device mounted on top of the digester fails or the sludge overflow line blocks and the liquid level in the digester continues to rise. In such a situation, the excess gas pressure inside the digester can exceed the maximum design pressure and damage the cover or its mountings. Fixed covers can also be damaged by excess negative pressure (vacuum) or if the rate of waste sludge withdrawal exceeds the feed rate or the vacuum relief device fails.

A gas system generally comprises three pressure relief devices; one mounted on the cover of the digester, one on the gas holder and one situated at the end of the gas line before the gas burner. This device releases gas to the waste gas burner before the design gas pressure of the digester cover is reached.

Gas leaving the digester is almost saturated with water vapour. As the gas cools, the water vapour condenses causing problems. The problem is more severe when digesters are heated. To solve the problem it is essential to remove as much of the moisture as possible before the gas comes into contact with the gas system devices. For this reason, water traps should be located as close to the digester as possible. All piping should be sloped a minimum of 1% towards the water trap, which should be situated at a low point in the gas line.

Flame traps are emergency devices installed in gas lines to prevent flames travelling back up the gas line (flashback) and reaching the digester. The flame trap generally consists of a box filled with stone or a metal grid. If a flame develops in the gas line, the temperature of the flame is reduced below the ignition point as it passes through the trap and the flame is extinguished.

Pressure regulators are used when a lower pressure than the system operating pressure, is required for a specific device such as a boiler water heater or incinerator. Regulators maintain a constant gas pressure at the point of use

The rate of gas production is probably the most sensitive process control indicator at the disposal of the operating staff. Gas meters should be regularly serviced so as to give accurate and reliable gas readings. Every effort should be made to have the gas meter calibrated every six months.

Check valves (non-return valves) are installed in the gas line to allow gas flow in one direction only i.e. out of the digester.

Gas pressure gauges indicate the pressure in the gas system and assist in locating any blockages in the line. If a blockage occurs, a pressure reading downstream will register a lower pressure than that of a gauge upstream.

The pressure relief device at the waste gas burner safely flares excess gas to the atmosphere and thus reduces the potential for a dangerous accumulation of gas in the system.

Many anaerobic digestion waste treatment plants have a means of storing excess gas. This can be in the form of either a floating roof on the digester or a separate gasholder.

A mixture of biogas and air can be explosive. Methane gas in concentrations of between 5% and 15% in air by volume is explosive. Operating staff on waste treatment plants should ensure that no air is allowed to enter the digester or gasholder. All piping and equipment must be sealed properly to prevent gas from escaping to the outside. There must be no smoking and all electrical installations, including light switches, torches etc must be of the explosion-proof type, as the smallest spark could ignite escaped gases.