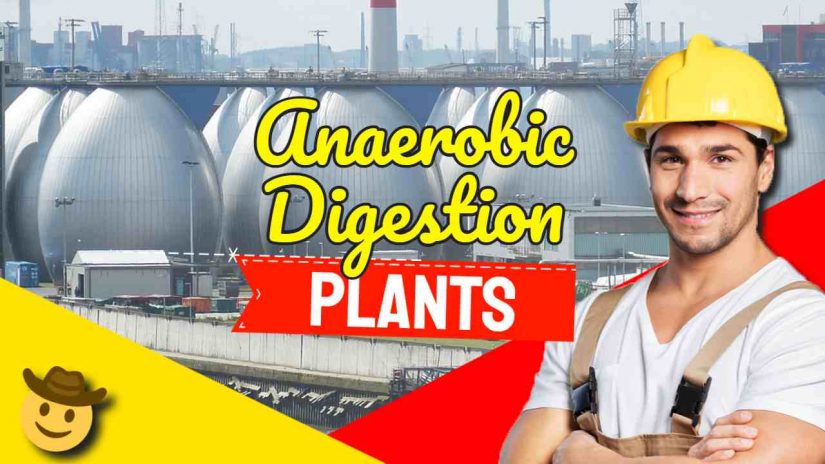 In this section of the website we explain Anaerobic Digestion Plants by country and the progress in recent years which has been made in the implementation of AD technology in each. For convenience we have split each country into a page, as listed and linked below:

We know that the burning question for many is “how much does anaerobic digestion cost”, so we gave that subject its own page. We hope it answers some of your questions. Check it out here; Anaerobic Digestion Costs

In all the subject nations there has been a substantial rise in the number of operating AD facilities of all types. 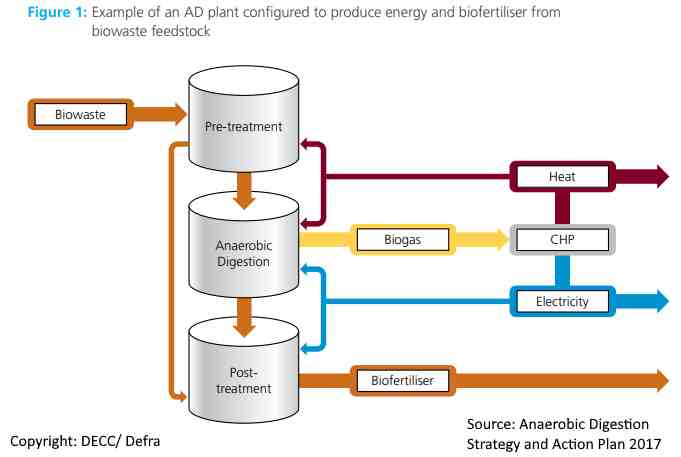 To appreciate the very wide scope for anaerobic digestion of Municipal Solid Waste (MSW) “putrescible fractions”, becomes clear when thought is given to the composition of household refuse. Think just how far existing recycling techniques can be improved by using this biowaste. The big advantage possessed when an anaerobic digestion plant is installed is that it produces “biogas”. That biogas can be:

This can in the future (and forever), provide society with a green fuel to replace fossil fuels.

Anaerobic Digestion Plants for MSW processing are still a technology that needs a lot of improvement and development.

There are a lot of details that will always need to be fine-tuned for these plants to work reliably for the fermentation of wastes. But, the sector is remarkably young.

For example, the currently used, most common, MSW biogas plant technology is no more than about 15 years old now (2015). Anaerobic Digestion has been used for sewage sludge digestion at wastewater treatment works for at least 70 years, but its adoption for municipal waste management is far more recent.

Why is Hydrogen Production from MSW Anaerobic Digestion Never Considered as Fuel? 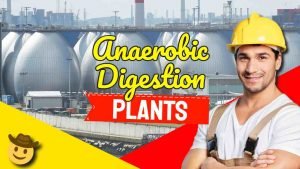 Hydrogen is produced during the anaerobic digestion process. But is rarely seen in the biogas because once it is generated it is soon re-used biologically in any one of many biological pathways.

If a search is done for “biohydrogen” in any leading web search engine. Many references will appear.

The basic rule is that as the pH falls and the process becomes acidic, more hydrogen will be present in the biogas. So, some would say:

“Why not optimize the process plant at a low pH, make more hydrogen and extract that as a fuel?”

The reason why this would not be a good idea lies in the economics of this and the stability of the operation of any biogas plant at the necessary low pHs.

For one thing, producing hydrogen pretty much always interferes with methane production.

In addition, the amount of energy that would be collectable as a result, within the hydrogen, would not be enough for the idea to be viable.

Recent improvements in Anaerobic digestion plant design outside the MSW sector have also been appearing in quick succession in recent years.

There have been numerous patented developments in the anaerobic digestion process, and some of these are often called Advanced Anaerobic Digester Systems (AADSs), and come in various guises:

In India, Nepal, Pakistan and Bangladesh biogas produced from the anaerobic digestion of manure is increasingly the norm in small scale digestion facilities. In India, biogas is called “gobar gas”, so to some extent due to the language used, this activity has been under-reported by the west until recently.

The investment effort has been and still is huge. It is estimated that “gobar gas” facilities are in use in over 2 million households in India. The number in Bangladesh exceeds 50,000, and there are also many thousands in Pakistan, particularly in the North Punjab region.

In the industrializing world, the digester is quite different from that used in the developed nations. It comprises an airtight circular pit constructed from concrete, plus suitable pipe connections.

Manure is drained into the pit, usually straight from the cattle shed, or pig stalls. Feeding is a daily chore when a charging vessel/ pit is filled with the necessary quantity of wastewater, and other organic wastes, and all are mashed up together by hand, before being fed into the reactor.

In general, the use of the biogas is simplicity itself, as the gas pipe is simply connected to the kitchen fireplace, with little more than control valves, and gas blow-back protection between the two. Nevertheless, the combustion of this biogas produces very little by the way of odour or smoke and is so much healthier than using open wood-fires that the benefits in health terms are self-evident and massive.

This simplicity in the implementation of anaerobic digestion in what only in the most generic way can be called “plants” in the western sense, and the use of cheap or free raw waste materials in villages, makes biogas use the most environmentally sound energy sources for rural needs, in hot countries where temperatures are high enough for this to work.

Energy is increasingly being recovered from sludge through Anaerobic Digestion Plants and methane gas production.

Incineration of dried sludge, which was the preferred method of sludge treatment starting in the 1970s, is being phased out in most countries, and new AD Plants are being built to replace old sludge incinerators. The US has now reached the halfway mark, with 50% of all wastewater treatment plants now having installed biogas plant capacity.

Anaerobic Digestion Plants processing dedicated energy crops can work well, and the best examples achieve very high levels of organic content degradation and biogas production. However, in most countries, subsidies for these crop-only fed plants are being phased out, due to concerns that they compete with crop used for food, and raise food prices.

Anaerobic Digestion Plants for Agricultural Use

In the agricultural sector of the developed nations slurry-only systems, are generally cheaper than plants built to also process crop waste and food waste, but unless a significant amount of food waste is used, generate far less energy than AD Plants fed by crops such as grass silage, and maize.

However, anaerobic digestion plants that are optimized in their energy output by using a limited amount of crop material (up to about 30%) is common, in the agricultural sector.

Some experts have even reported that the simple expedient of adding crop waste can increase energy output from a manure-only AD Plant tenfold.

It has been suggested that a 10 times increase can be achieved for only three times the capital cost, when compared with a manure-slurry only system.

The Prospect for Anaerobic Digestion Plants of the Future

In all the many sectors of activity of anaerobic digestion, there is wide scope for further technical improvements and the installation of additional capacity.

For example, the collection of food waste for use in anaerobic digestion is in its infancy in most developed nations and will require large increases in existing capacity.

The only possible area of contraction in the number of anaerobic digestion plants is in the use of these plants where they are fed solely by dedicated food crops.

The present trend in legislation for landfills is for the waste management industry to move ever more closely towards increased waste minimisation and to the eventual elimination of biodegradable waste sent to landfills.

It is the personal view held by the authors of this website that this is good news for the environment, and for society generally. Anaerobic digestion is ideal for the pre-treatment of organic waste for the production of biogas, and we hold the view that energy generation from landfills by collecting the biogas, comes a poor second.

Therefore, although landfill gas collection and utilization from all existing landfills remains a priority, the phasing out of organic waste disposal to landfills is to be welcomed.

The future for anaerobic digestion plants is bright!

You may also find our article on Anaerobic Digestion Plants in Scotland interesting here.