Dry AD – What Happens Inside a Dry Anaerobic Digestion Plant

Dry anaerobic digestion has been seen by some to be a bit of a secret. It isn't, but the impression of it being a hidden technology persists, because most people in the AD industry provide “wet AD” processes.

Why Isn't Dry Anaerobic Digestion (AD) as Well Publicised as It's Wet Counterpart?

The mainstream AD people don't mention it, because they don't offer it.

That does not detract from the legitimacy of the technology, which can only be applied for dry organic feed materials. By suitable dry AD feedstocks we mean organic materials which will stand-up in the bucket of a front-end loading machine, and will be reasonably granular, allowing a good passage of air and liquid through the bulk of the material.

You can add water to most dry AD feedstocks which would be suitable for Dry AD (see ArrowBio), and then use the tradition big tanks (CSR designs) which are most common. It would seldom, if ever, make economic sense to take a wet, substantially liquid anaerobic digestion feedstock and dry it in order to apply the Dry AD process.

Dry AD is particularly well-suited to processing the organic fraction of municipal solid waste, after a high degree of recycling has been done on “black bag” residual MSW. It is very useful as a component of a zero-waste to landfill strategy. Our view is that the technology has a very positive future, and its use will continue to expand, especially where communities move toward implementing “zero-waste”.

Now we have introduced the technology and you know what Dry AD is good for, we move to the heart of the matter, which is exactly what happens inside a typical Dry Anaerobic Digestion Plant. But, please be aware that practices do vary between the various dry AD technology providers.

The following description is available on the Waste Advantage Magazine website. (A visit to that, much longer, article is recommended for the serious reader – link provided below this section.)

What Happens Inside a Dry Anaerobic Digestion Plant – Step by Step

This is very similar to in-vessel composting, but in composting there is no anaerobic stage, and therefore no possibility to extract biogas energy.

For the case study described, we are also informed of the following:

The above isn't the whole step by step story, and we are indebted to another website for that information, as follows (link to that website is provided after this section):

What happens inside an AD plant Before the Dry AD process?

What happens inside an AD plant After the Dry AD process?

All AD plant operators will tell you that feedstocks are mixed before they are loaded into the digester tunnels for an optimized Carbon to Nitrogen Ratio, prior to digestion. It is essential to get this first step right for successful anaerobic digestion. Apparently, the feedstock shovel loading operator is trained to mix the feedstock as it is loaded and the AD tunnel filled. The general rule is that, brown or woody material has a high ratio and green material or food waste has a low ratio.

2. How Feedstock Material is Stored on Arrival Without Causing Nuisance Odors for Neighbors

Material which is delivered for digestion must be stored awaiting an available digester chamber. The way to do this is in a bay which is in a building under negative pressure (i.e., a vacuum) for odor control.

2. How Long Should the Fermentation Stage Run for?

We have seen guidance that a 21 day, 3-phase process begins should take place for an adequate period after the mixed feedstock is added to a digestion chamber.

Start: Anaerobic digestion only occurs in a specific temperature range. To bring material into this range, a heat-generating, aerobic decomposition process is started by pumping air into the chamber allowing the material to heat itself up naturally! It’s a clever solution with lower energy requirements than heating up the material with steam or hot air.

Fermentation: Once at the correct temperature, percolate with bacteria from cows’ digestive tracts is sprayed onto the material, starting digestion and producing biogas. The key indicators during fermentation is quality and quantity of methane produced. Unfortunately, high quality doesn’t occur during times of high quantity. To increase quality, CO2 and other components are filtered out.

Termination: After ~20 days, methane production has been greatly reduced and doesn’t make sense to continue. To stop the process, percolate is no longer sprayed onto the material. Air is again added to the chamber but this time to purge the chamber of methane and create a safe/non-explosive environment to open the chamber and allow the removal of digestate.

Remaining digestate is treated in an IVC (In-Vessel Composting) tunnel to compost the material. The tunnel also removes ammonia gas produced and processes it with an acid scrubber where sulfuric acid is sprayed over the gas to precipitate out the ammonia as ammonium sulfate.

Scrubbed gas then passes through a BioFilter similar to the flora on a forest floor – removing odors and harmful gases – and into the atmosphere. The compost produced is screened offsite and sold to farms!

Overall, the facility is a great example of anaerobic digestion with space and odor constraints while remaining financially viable.

There is a great YouTube video summarizing the process. via the South San Francisco Scavenger article.

If you found this page useful you might also want to visit our other Dry Anaerobic Digestion article here. 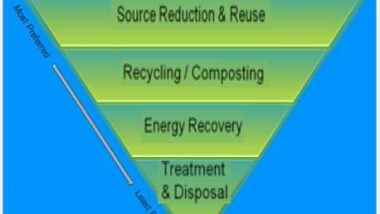 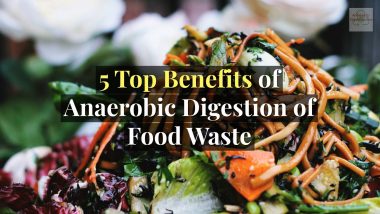