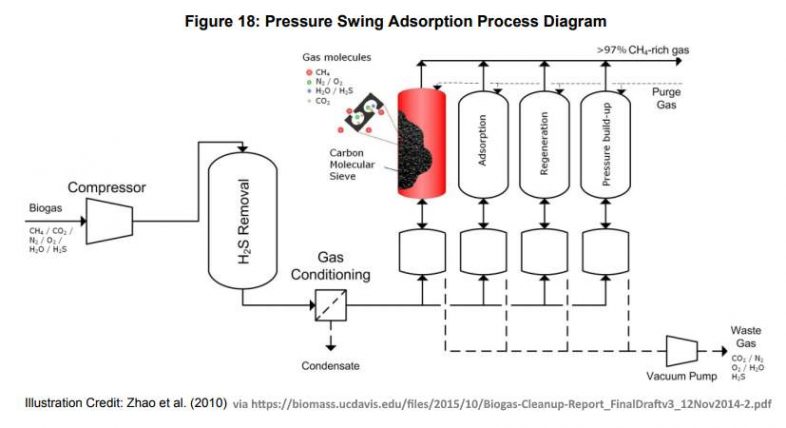 8 Biogas Upgrading Technologies and the Cost of Biomethane Production

The science of the existing biogas upgrading technologies is very young and rapidly evolving. In this article we first provide our video as a rapid introduction to this subject.

If you watch our video which is an introduction to the content of this page, don't forget to scroll on down afterwards for much more information:

This presentation contains images that were used under a Creative Commons License. Click here to see the full list of images and attributions:

In this text we concentrate on CO2 removal as the most important part of any biogas upgrading undertaken.

The most widely commercialised and used upgrading technologies are those that have for a long time been employed by the natural gas industry, pressure swing adsorption (PSA), chemical solvent scrubbing (using amines), and pressurised water scrubbing.

There are also a number of emerging gas upgrading technologies in the research and pilot phase that claim lower operating costs as well as simpler and more compact process designs which are in our list and we have described later (e.g., rotary water scrubbing, supersonic separation, industrial lung).

Although the main purpose of biogas upgrading technologies is to remove CO2 from the gas stream, other contaminants may also be removed. However, specific contaminant pre-treatment (especially for hydrogen sulfide) is usually needed to improve the absorbent’s lifetime, lower regeneration costs, and reduce maintenance intervals.

The following is our list of biogas upgrading technologies:

Pressure swing adsorption (PSA) is a method for the separation of carbon dioxide from methane by adsorption/desorption of carbon dioxide on zeolites or activated carbon at alternating pressure levels. This technology is often applied in the gas treatment industry as it also effectively removes volatile organic compounds, nitrogen and oxygen from industrial gas streams. 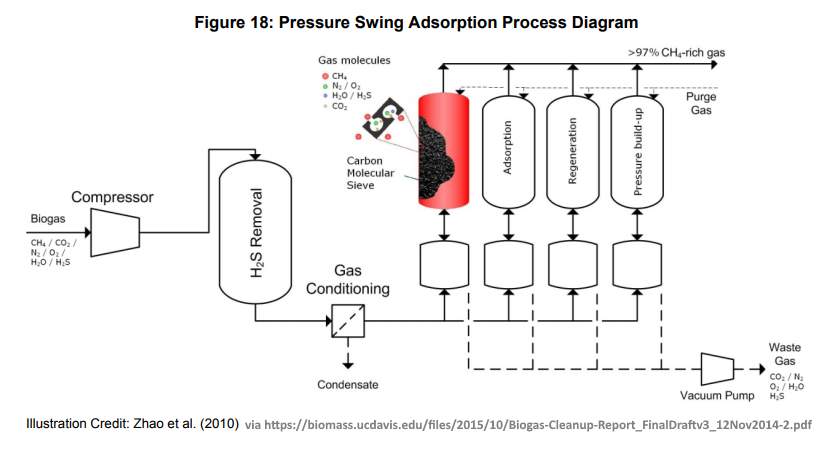 CO2 can also be removed from a gas stream by chemically binding it to certain dissolved compounds or liquid chemicals, for example, alkaline salt solutions and amine solutions.

There are two types of chemical solvent scrubbing and these are known as Alkaline Salt Solution Absorption, and Amine Absorption.

In this popular method compounds can be physically absorbed (or dissolved) into a liquid solution. Water is commonly used as he solvent due to low cost, low toxicity, and high availability. CO2 and H2S preferentially dissolve into water compared to CH4. 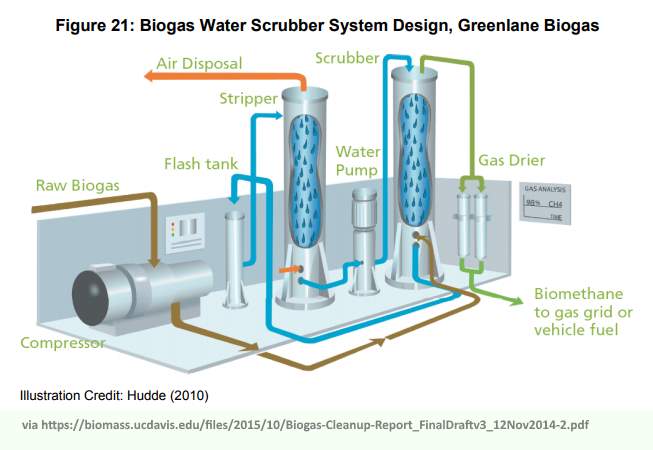 Carbon dioxide and hydrogen sulphide can also be absorbed using liquid solvents other than water. The most industrially applied of these are organic glycols (e.g. polyethylene glycol). In return for higher cost and complexity than water scrubbing, these physical organic solvents allow for greater H2S and CO2 solubility than in water, allowing for lower solvent demand and reduced pumping.

Biogas generally requires pre-treatment to remove aggressive substances that can destroy the membrane material, at the current stage of development of these biogas upgrading technologies.

Cryogenic distillation takes advantage of the fact that carbon dioxide will condense and freeze before methane condenses allowing the CO2 to be removed from the gas stream as a liquid or solid.

In cryogenic distillation, biogas is compressed anywhere between 260 – 435 psi (18 – 30 bar) and cooled by heat exchangers down to -45 to -59 °C until certain gases become liquefied. High system pressures are used to ensure that carbon dioxide remains in the liquid phase and does not freeze, which would clog the pipe and heat exchanger system. The liquefied carbon dioxide is then easily separated from the remaining gas, producing highly pure biomethane.

The Cryogenic Distillation process is only cost-effective at large scales, given the current stage of development of biogas upgrading technologies.

A recent, novel approach to gas clean-up is supersonic separation, consisting of a compact tubular device that effectively combines expansion, cyclonic gas/liquid separation, and re-compression. A Laval nozzle is used to expand the saturated feed gas to supersonic velocity, which results in a low temperature and pressure (Figure 29). This causes the formation water and hydrocarbon condensation droplet mist. A high vorticity swirl centrifuges the droplets to the wall, and the liquids are split from the gas using a cyclonic separator.

This gas conditioning technology has been used to simultaneously condense and separate water and hydrocarbons from natural gas. Further developments allowing for the bulk removal of CO2 and H2S are currently underway.

An industrial lung, also known as an ecological lung, is a bioengineered process which utilizes carbonic anhydrase—the enzyme present in our blood that catalyzes the dissolution of carbon dioxide formed from cell metabolism. Carbonic anhydrase pulls CO2 into the aqueous phase in an absorber column where it can be picked up by an absorbent (Figure 30). The CO2-rich absorbent is then regenerated by heat in a stripper column releasing a pure stream of > 90% CO2.

Laboratory experiments with biogas showed that they can purify it to 95 – 99% methane content with a CO2 content less than 1%. 2 Solutions is currently operating a large bench-scale unit.

The cost of full biogas upgrading to enable its use in commercial vehicle fleets and for injection into the natural gas grid for distribution to private and industrial natural gas customers has two classifications. These are cleaning and purification. The biogas must be both cleaned by the removal of unwanted constituents, such as water and CO2, and further purified to reduce low level contaminants to become very close to the composition of natural gas.

Biogas cleaning, whether by adsorption, water scrubbing, or biofiltration, requires the purchase of a reactor vessel. Water and bio scrubbers require large sized reactors and liquid pumps whereas dry absorption chambers do not. However, adsorption systems require the eventual change-out or regeneration of media. Thus, adsorption systems will have lower upfront and operating costs, but can have higher maintenance costs.

Hydrogen sulfide is usually the largest contaminant in biogas after CO2, and thus a primary target for cleaning. Consequently, the cost of biogas cleaning is often listed in terms of dollars per amount of sulfur or hydrogen sulfide removed. For gas streams with 500 – 2,500 ppm H2S, it generally costs $1.50 – $5.00 per pound of sulfur removed (McDonald and Mezei 2007). To remove moisture, a refrigeration or gas condensation system is often applied.

Membrane separation may be an exception, providing cost savings as long as membrane replacement rates remain low. However, among the three most common upgrading technologies—pressure swing adsorption, pressurized water scrubbing, and amine absorption—there is no clear winner in terms of initial cost.

Biogas Upgrading to Biomethane for grid injection or transport vehicle use requires more sophisticated cleaning than is necessary for electricity generation, and on top of that the upgrading equipment has to be paid for.

Connection to the gas grid is usually more expensive than connecting to the local grid power lines, and upgraded biogas must also comply with stringent and expensive continuous testing requirements if it is to be accepted for grid injection. This entails laboratory costs, and commonly also a high level of management time liaising with the Gas Grid Company to demonstrate the continual quality of the injected biomethane. 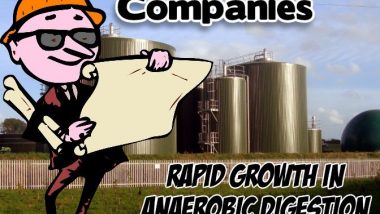 How to Select Anaerobic Digestion Companies for Best Outcomes 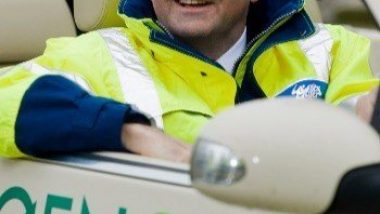