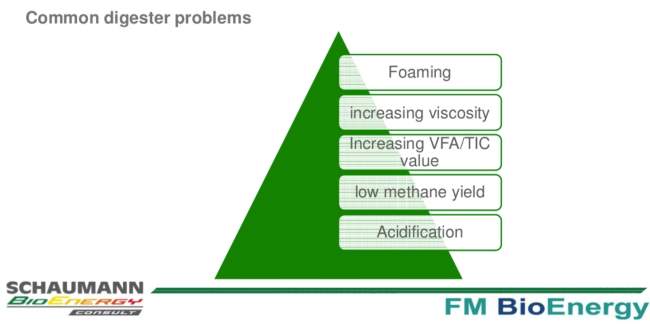 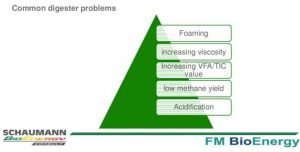 We list 5 anaerobic digestion problems which are common to the biogas process, and are easily and rapidly corrected for and avoided, at AD facilities run by expert biogas plant operators. BUT, the same problems can be disastrous/ cause long digester-downtime in the hands of novice Anaerobic Digestion Plant operators.

The 5 Anaerobic Digestion Problems, are:

Biogas plays an increasingly important role as a renewable, store-able, 24/7 energy source. Anaerobic digestion (AD) is the process used in biogas production. Most anaerobic digestion problems are routinely avoided by careful plant operation by experienced staff using their knowledge on the suitable choice and, if necessary, mixing of feedstocks. Nevertheless, it is useful to all AD industry participants that the main anaerobic digestion process problems are documented, and we have endeavoured to provide an accurate summary of the main problems in this article, as follows: 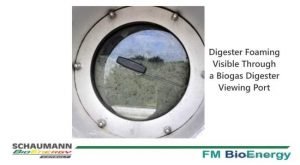 Foaming incidents often lasted from one day to three weeks, causing 20-50% biogas production loss. One foaming case history has been reported at a biogas plant indicated that the combination of feedstock composition and mixing pattern of the reactor was the main cause of foaming.

No difference in bacterial communities between the foaming and non-foaming reactors was observed in this case. This indicated that filamentous bacteria were not the main reason for foaming in this occasion. via ncbi.nlm.nih.gov

It is one of the most expensive problems. When the digester biology is “over-acidified”, the effect can take months until the digester biology recovers, performance is restored. Throughout that period the biogas output will be reduced, and the operator must anxiously wait for the expected revenues to flow again.

To avoid over-acidification it is important to control the digester biology continually, and to react to early-signs of problems quickly and in the correct way.

It has been reported that the overload can be started by the following factors:

The overload is in such circumstances caused by the fact that the methane bacteria are unable to grow fast enough to degrade the substrate to biogas.

The cause for the slow-down in growth of the methane bacteria needs to be identified to ensure the right corrective action or extended delay in the recovery of the plant's methane output will ensue.

On occasions excessively high concentrations of ammonia can also inhibit methane producing bacteria, but this is one of the possible anaerobic digestion problems which should be designed-out within the process design stage. – source generally via friedmann-biogaspraxis

Corn silage has been reported as causing this problem, but it occurs with other silage types as well.

It is reportedly most common when the optimum harvesting time is missed due to poor weather conditions. This can lead to silage corn stocks that are over-matured. High starch levels can be present, which can add to the problem.

The use of these silage types causes problems in biogas production plant. Floating layers form and flow and pump properties deteriorate.

In addition to poor material transport and defective degassing, this often also leads to elevated plant energy consumption and increasing wear and tear on agitator/ mixing equipment. In extreme cases, major faults or production outages can occur. via dsmbiogas

An increasing VFA (Volatile fatty acids) and at times also in the TIC (Alkalinity, total inorganic carbonate buffer) value, may occur when the organic loading rate (OLR) is increased above a long-term stable rate. The biogas process becomes unstable, due to accumulation of volatile fatty acids (VFA), and/ or a non-optimum elevated (alkaline) pH.

When the anaerobic digestion (AD) of biowaste is impaired it is the accumulation of volatile fatty acids (VFA) which in itself is cited as the cause of a process slow-down resulting in further VFA accumulation in a worsening cycle, unless the OLR is reduced.

Lower than anticipated methane yield is very often the first indication of other problems, so it is important to continuously monitor the percentage of methane and other gases such as hydrogen sulphide (H2S), as an early-warning of the need to make adjustments to the digester operation.

Low methane yield is a symptom of other problems, and is only included here for completeness.

When methane yield drops, the operator should investigate the first four of the above five problems to find the underlying cause of the low methane yield.

The two most common anaerobic digestion problems that occur during this bio-technological process in practice are, foam formation, and over-acidification.

The first is the least serious and can often be rectified in the short term by the use of certain chemical additives, and in the longer term by modifying the feedstock and/ or improving mixing/ stabilising digester conditions and other measures to reduce stress on the digester biology.

Although foaming may be a symptom of other more intractable problems, over-acidification can take the longer time of these two most common anaerobic digestion problems to correct and as a consequence of that, result in the biggest loss of biogas income.

The moral of this article for new commercial biogas plant operators, to take-away with them, is the fact that going it alone, and not taking expert advice until you have gained your own practical experience – when biogas/ anaerobic digestion problems occur – can be a very expensive decision to take.

Install good quality gas monitoring equipment and take expert anaerobic digestion process operational advice, in the initial months and years of biogas plant information. In that way there is no reason why biogas plants cannot be operated very successfully with very low-downtime rates.

a) Article inspired by: Dr Thomas Fritz, Schaumann Bioenergy, Presentation to the ADBA, AD and Biogas Conference 2015, via http://adbioresources.org/purple-day-one
b) https://link.springer.com/article/10.1186/s13705-016-0095-7
c) http://euagrobiogas.rtd-services.com/images/7.pdf

Disclaimer: The author is not a biogas process expert. This article has been compiled from online research, and should be regarded as no more than entertainment. As elsewhere on this website, no liability will be accepted for any loss arising from any action or inaction as a result of this article, or related videos. The reader/ viewer must make their own research and take action based upon that work alone. 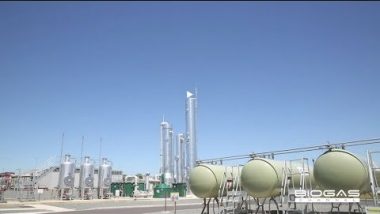 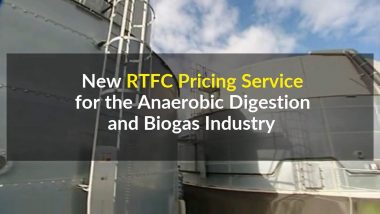