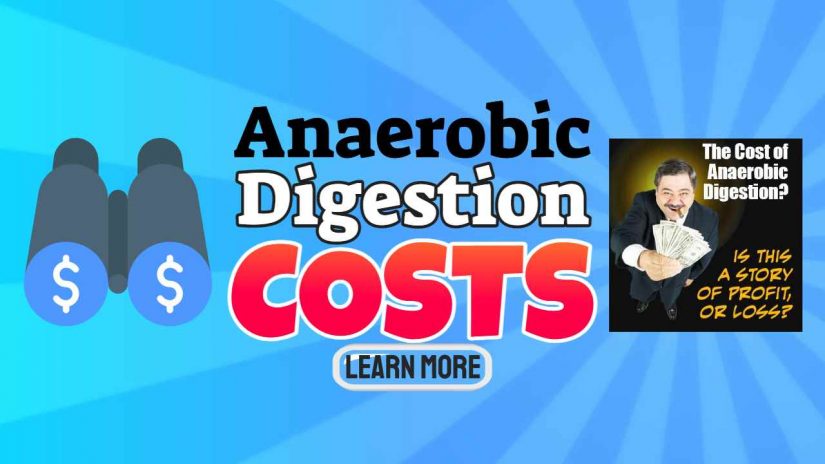 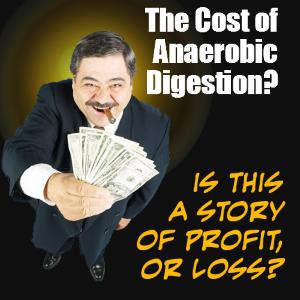 Reliable sources of anaerobic digestion costs are hard to find, or non-existent.

Finding out about anaerobic digestion (AD) costs can be a thankless task. The available information we have found online is invariably only provided as the total capital cost of new AD plants, in a Press Release, when a new plant is opened.

A common headline we have seen is: “New Anaerobic Digestion Plant Opens at a Cost of $x million”. The figure is given to impress the readers on how much money has been spent. Little on no information is, in our experience, ever provided about what the quoted cost of the AD plant includes. Nor is there data included on the output power achieved to enable the reader to compute the cost per unit of electricity produced or biomethane sold.

How much does an Anaerobic Digester Cost?

The U.S. Environmental Protection Agency AgSTAR, has stated that the capital cost of an on-farm anaerobic digester in the US ranges from approximately $400,000 to $5,000,000, depending on the size of the operation and technology used.

A typical on-farm anaerobic digestion unit, again in the US, costs approximately $1.2 million.

What is the Cost of a standard AD plant?

There is no such thing as a standard AD plant for which it is possible to find a quoted cost, and therefore, we cannot provide here the cost per kilowatt-hour or specific cost for heat output from a biogas plant, either. They simply vary too greatly in what each AD plant uses as a feedstock and does within the plant in order to produce its products.

To solve this conundrum, we searched the internet for a way to assess what the costs of biogas digesters would be for a particular site/ business and project.

We searched for a way in which:

Such a resource for obtaining AD Costs exists! It's also free! Scroll DOWN. Read on, and watch the video below!

But if you absolutely must have simplistic AD costs,  SCROLL DOWN to the bottom of this page, where we have retained some old prices from several years ago, and also added an example anaerobic digestion pricing table for a farm biogas plant, from the US BIOGAS OPPORTUNITIES ROADMAP PROGRESS REPORT (USDA – EPA – DOE).

This page provides “Wet AD Process” costs, except at the bottom (SCROLL DOWN!), we have some costs for a “Dry” AD Plant.

The best resource for assessing AD plant costs which we have found for producing preliminary cost estimates for AD plants is provided by the Washington State University, Centre for Sustaining Agriculture and Natural Resources.  The resource consists of a free MS Excel spreadsheet, and to complete the spreadsheet properly we recommend that you watch their webinar, which explains the spreadsheet and how to use it.

We suggest that you watch the following YouTube webinar video for information on the spreadsheet and how to use it. (An explanation of how to use the calculator starts in the 6th minute):

It is called the Anaerobic Digestion System Enterprise Budget Calculator. Download it here.

The following is from the US BIOGAS OPPORTUNITIES ROADMAP PROGRESS REPORT (USDA – EPA – DOE) AD plant costs table for an 850 cattle dairy herd. 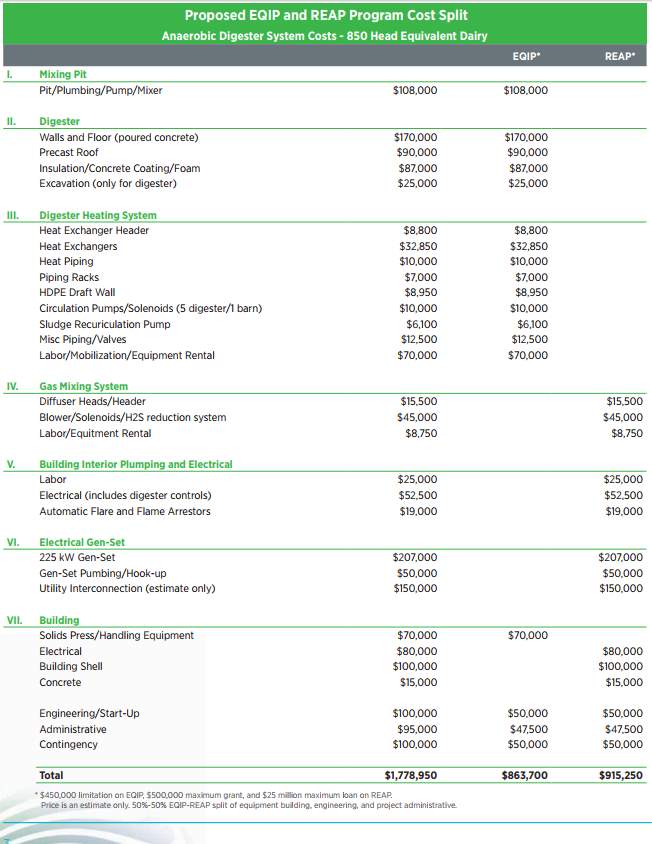 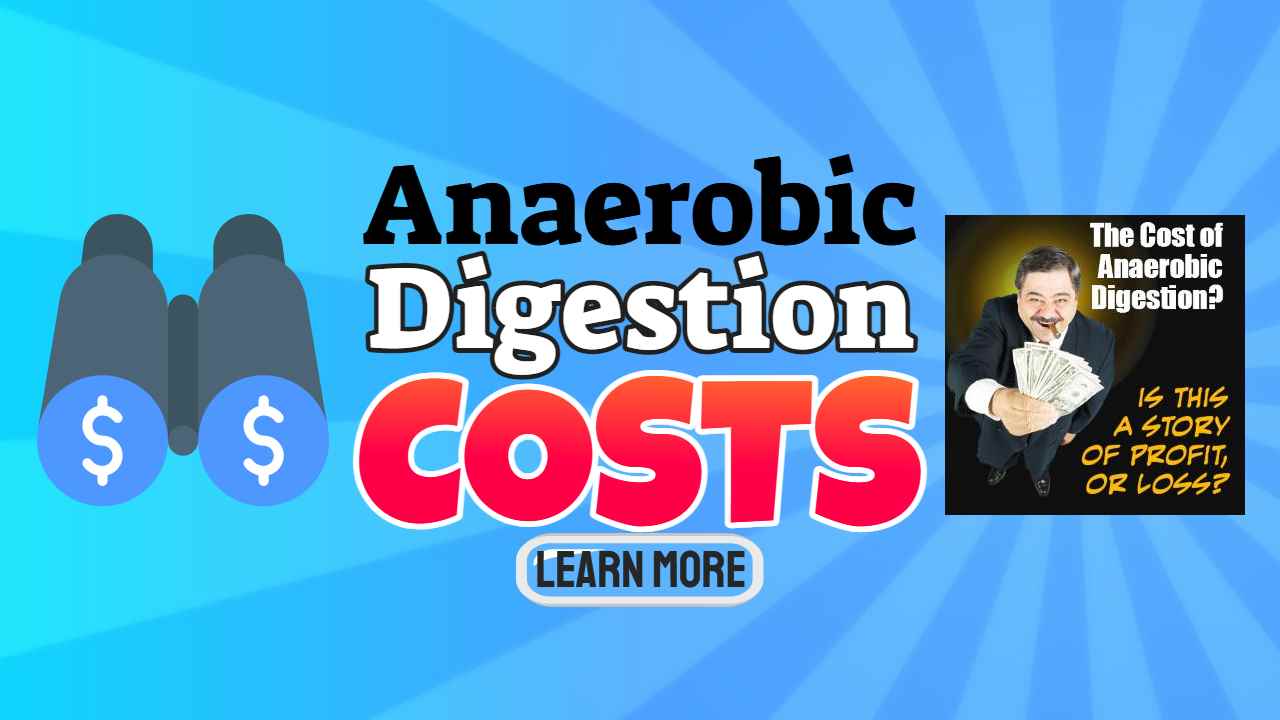 Comparison of Electricity Generation Costs vs Biogas Upgrading to Biomethane

The following table appears to suggest that the costs of power generation using a diesel engine and biomethane upgrading are similar. Read the full report at Davis Edu.

The article below this point is a historical snapshot, now out of date, of how things were, before the economic viability of AD on-farm improved dramatically when the Feed-in-Tarif was introduced into the UK, after 2010.

It should be noted that the report is dated October 2005 and that since then world oil prices have also risen by 15 to 20% (January 2007), which in itself has transformed the cost of energy so much that for many farmers on-farm biogas production has become very viable economically.

Probably the most authoritative recent study on the viability of AD is the report prepared for the Sustainable Agriculture Strategy Division of the United Kingdom Department for Environment Food and Rural Affairs (DEFRA).

The report is titled, ‘Assessment of Methane Management and Recovery Options for Livestock Manures and Slurries’ and is available for download from DEFRA’s website (Report number AEAT/ENV/R/2104).

In 2005 the UK's DEFRA concluded that SD on farms in the UK was not profitable.

The study’s, authors looked in detail at the economics for options for on-farm AD and centralised AD (CAD) in England, and their conclusions follow:-.

A cost-benefit analysis based on the options and assuming Government support in the form of capital grants suggests that greenhouse gas emissions equivalent to up to 0.03MtC could be saved annually at a cost of £60/tC, if 20 CAD plants were built. However, this would result in lifetime costs to the Government of £143M.

On that basis, on-farm AD would need significant support to be economic.

The authors, therefore, found (in 2005) that the main challenge to Anaerobic Digestion in the UK is still an economic one.

The illustration (above) shows an example of Agricultural Biogas Plants on Dairy Farms and the Annual methane emission from manure management in England. By encouraging anaerobic digester technology governments can reduce slurry methane emissions significantly.

Furthermore, they were of the view that even for CAD (which is more economically viable they say, than on-farm AD, high capital costs and that an uncertain supply chain and market for products gives rise to high levels of project risk.

A combination of actions involving financial incentives and engagement with farmers and technology suppliers would be needed to stimulate the market.

Our view on AD Profitability

Our view at Anaerobic-Digestion.Com is that there is a very good case for additional government investment in on-farm AD.

The experience from Germany suggests the main route to market for on-farm AD is to set incentives at a level such that it becomes a recognised source of extra income for farmers.

Their analysis suggested very strongly that this will be an expensive option – for Livestock Manures and Slurries.

So, it does have to be considered that the dawn of the significant adoption of AD for Livestock Manures and Slurries is still some way off.

There is a significant win to be found from the reductions in greenhouse gas emissions, and the necessary £143 lifetime costs estimated for the first twenty plants would surely deliver big bonuses in the development of the technology. If done well this investment would act as the seed corn for the mature development of the AD industry at which time costs would surely plummet.

Were we not at a similar stage with wind turbines no more than ten years ago?

Surely many of us can remember that wind turbine rotor blade failures featured heavily in the news. The doubters were saying that the reliability problems being experienced in that industry at the time were close to insoluble for such highly stressed and massive blades. Yet now who even mentions such problems?

The parallels are all around us which show us the benefits of strategic investment and the potential in AD. Let us see some leadership from our politicians who should by now realise that the public demand for action on carbon emissions is high.

The public also increasingly want to buy renewable power for their own domestic use, and so the provision of financial incentives for AD plants can help in this and many other ways. 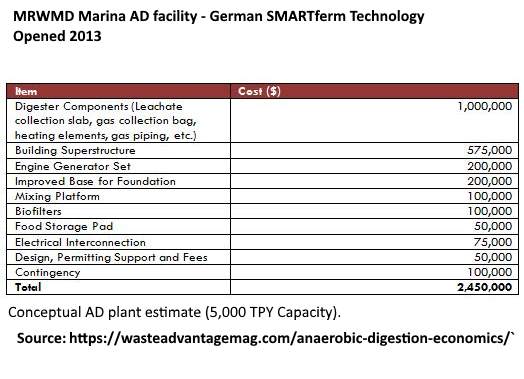 Renergon™ provides a free anaerobic digestion costs calculator on their website to give an initial assessment of the cost of installing one of their specialist “dry” digesters.

It's described as an aid to assess energy potentials and possible proceeds and does a lot more than provide costs.

Their description says that their free calculator provides information on gas and energy yield, biogas utilization, potential revenue in addition to cost, and includes GHG reduction and more.

Using the calculator, you can figure out how much gas, electricity, and heat you'll get out of a biogas plant based on the input substrates. Visit the Renergon™ website here.

In the AD process, enzymes are used to degrade organic materials by microorganisms. Since its inception, AD has been widely used to produce biogas. Organic matter is converted to biogas by AD. You can use biogas as a source of energy for heating and transportation, as well as a source of methane and carbon dioxide.

Food wastes from residential, commercial, and institutional sources, as well as fats, oils, grease, and food processing wastes, have much higher biogas yields and digest more quickly and completely in a digester than leaves and yard trimmings.

Anaerobic digesters are non-renewable energy-saving processes to treat waste, particularly in applications that convert biogas into valuable fuel. They are excellent for job creation in rural communities and are also beneficial to managing the agricultural waste stream.

However, they require homogeneous mixing to maximize efficiency. These functions may usually be accomplished in two ways: mechanical mixing (gasoline) and hydrolysis mixing (hydrolysis).

All technologies claim similar results in the nature of the output. Each varies between capital and operating expenses, the largest input often being energy. This is the sacrificial load incurred on the output energy, in order to power the process itself. Thermal energy consumption for heating the digester is typically 10% to 20% of the energy output from the biogas produced.

In all wet AD CSTR cases, hydraulic mixing provides advantages including high mixing power, efficient mixing patterns, but also crucial to overall costs are low maintenance and a consistent low-cost or free supply. To be able to charge a gate fee, say for food waste is also important for profitability.

After determining the possibility of an anaerobic digester as a technically feasible step and the assessment of the potential of methane generated, you should consider the economic feasibility. You should determine the extent to which you will offset costs by generating revenues or reducing internal energy expenditures over the life of the digester as part of the economic analysis.

The construction of an AD system may be readily economically feasible if subsidized through grants or assisted through a low-cost loan. The net operational cost of a digestive digester must be taken seriously before making large capital investments. All project promoters must therefore carry out thorough financial analysis prior to applying for loans or purchasing anaerobic digesters.

Because most digesters are semi-customized by the technology manufacturer, the capital outlay and operating/maintenance costs will differ. When calculating the cost of an anaerobic digestion system, annual operation and maintenance costs (such as maintenance, repairs, parts, labour, and insurance) must also be considered.