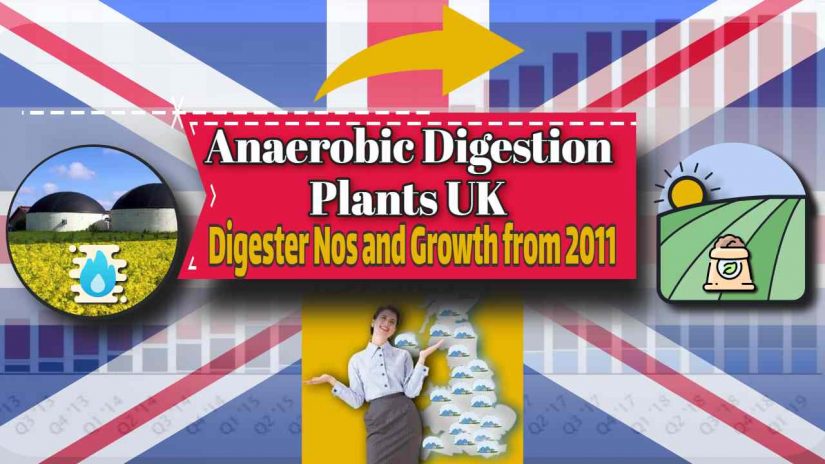 The number of anaerobic digestion plants in the UK, (anaerobic digesters UK) has been growing since the current UK interest in building these facilities began at the start of this century.

Now in the summer of 2021 there are 685 operational AD Plants (including sludge digesters at Wastewater Treatment Plants) according to ADBA.

Most UK AD plants have been commissioned since 2013 when the number of Anaerobic Digestion Plants in the UK hit 100 for the first time.

That was seen as a big achievement and was reported extensively in the trade press as being a turning point.

The point at which 100 UK operational biogas plants was reached was seen as a milestone. It indicated that a fledgling UK biogas industry had become established.

The best period for growth in the capacity of UK AD plants occurred in the period 2013 to 2017. Since 2017 the industry has seen a slowdown.

However, it is thought that the period 2021 to 2022 will see this trend reversed.

Where Can I Find Data on UK AD Plants in Operation?

A few years ago WRAP provided a UK AD Plant map which it was keeping up to date with an invitation to all active AD Plant operators to enter details of their own plants. That has disappeared (Summer 2021) and The NNFCC website at first appears to have taken on the responsibility for providing these details here. On that page it states “Click here to open the map in a new window” but public access was not available when we tried.

Although, as a UK government-funded organisation it would be expected that WRAP would maintain the most up to date data on UK AD Plants. That does not now appear to be true.

AD Industry Trade Association ADBA does still maintain a record of UK AD Plant numbers and locations, but this is also no longer available to the public. Their anaerobic digestion plant list and the map showing each plant's location would appear to be the most authoritative source for UK anaerobic digestion plants. But can only be viewed by their members.

Attribution of Creative Commons Footage: This video contains clips from a Clearfleau AD video and is included in compliance with the CC0 licence provided with their YouTube/Vimeo published video.

Scroll down further on this page because we also provide historic lists of the early biogas plants as a snapshot of the early days of Anaerobic Digestion plant operation in the UK.

Back in 2016 things were going well for anaerobic digestion in the UK. The following is our article as updated in 2016:

The Number of Anaerobic Digestion Plants Operating in the UK in 2016?

Currently (Autumn 2017) the latest WRAP update is 254 anaerobic digestion plants (March 2016), but that figure for operational anaerobic digesters UK, is now over a year out of date.

During 2016 there was reported to have been a surge in anaerobic digestion plant construction. Existing UK government subsidy approvals would have been lost if a number of these plants had not been completed before the UK ROCS subsidy was discontinued.

The Anaerobic Digestion and Bioresources Association (ADBA) reported that 100 biogas plants were built in 2016. If that rate of completion of anaerobic digestion plants (in the  UK) had been maintained an additional 150 plants would have been completed. Not only completed but also commissioned in the intervening period to the end of September 2017.

Looking at the arithmetic: 254, plus 150 only accounts for about 400 anaerobic digestion plants UK wide, so there may be some ADBA listed plants that have ceased to operate. Making that an underestimate of the actual plant numbers completed in the period.

However, the ADBA anaerobic digesters UK list must be considered the most authoritative source.

The list is maintained by the UK association which represents the biogas plant operators themselves.

How many ad plants are there in the UK?

On the basis of their data, the UK has now broken the 500 AD plant mark now, so the answer to the question: “How many ad plants are there in the UK” is: 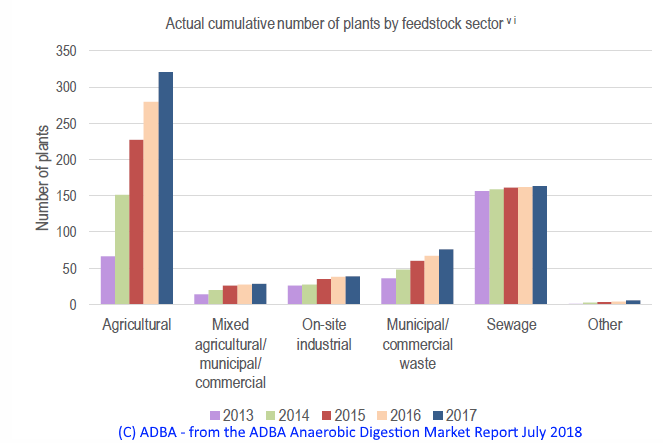 The fall in UK AD plant growth in 2017 was disappointing.

However, the future growth rate for anaerobic digestion plants in the UK is now thought to be recovering. One reason for this is that the UK government has made a recent announcement on a future subsidy. This is intended to help the industry. It will be part of the Department for Transport's (DfT's) response to its consultation on the Renewable Transport Fuel Obligation (RTFO) as we have previously reported in our weekly newsletter.

How did the country get to the point of having over 600 UK anaerobic digestion plants?

Scroll down further and you will see our historic information on UK biogas plant numbers over the last decade.

The following is our version of the list which appeared in 2013, on the Biogas Info website maps page, when the number of UK plants had just risen to a magic 100 for the first time!

The table below was last updated in 2013. We have retained it here because we think it remains an interesting record of the 100 first biogas plants in the UK. We recommend a visit to the WRAP list (link provided at top of this page) for the most up to date record of anaerobic digestion plants UK.

List of the First 100 Anaerobic Digestion Plants in the UK 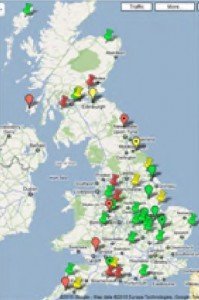 The following may not be on the list of 100 above, or are featured for their interesting features:

The following may not be on the list of the first 100 AD Plants above, and are included for their historic interest:

We hope this information about the anaerobic digestion plants UK wide, was useful to you. Please give us your feedback in the comments box below.