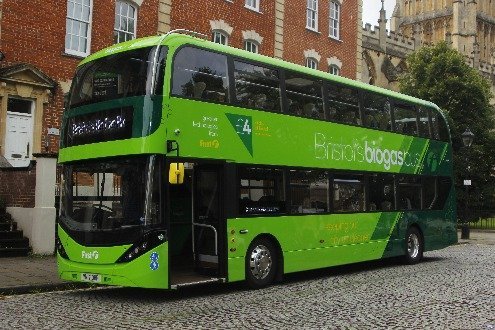 The primary uses of biogas are domestic cooking and lighting in developing nations, and electricity and heat in the developed and wealthier nations. This will change over the next 5 to 10 years in wealthy countries keen to maximize their efforts to avert climate change. That's because most nations have become aware that biogas is too precious a commodity to waste on inefficient uses.

Electricity generation using generators is an inefficient use of biogas, because the losses in the gas engine/ generator equipment are high, and when compounded by further losses in electricity transmission through the High Voltage grid. if electricity is to be generated from biogas, it would be more efficient to make that electricity in biogas fuel cells.

However, transport desperately needs a clean renewable fuel, and biogas, when cleaned up (or upgraded) to what is known as biomethane (equivalent to a compressed natural gas) is that fuel. Expect to see heavy goods vehicles and buses fueled by biomethane (made from biogas), popping up near you, before long!

A list of the most frequent uses of biogas is as follows:

When biogas is used as a vehicle fuel it is also useful for its low emissions, to help avoid adding to the air-pollution which has now reached crisis point in most large cities.

Biogas Use as a Backup Fertilizer Source

What we never hear mentioned is the need for a back-up fertilizer system. In many countries the law requires companies to have back up batteries and generators for critical electrical systems, in case of power failure.

But is there a back-up fertilizer system in place for the avoidance of loss of food production in case of fertilizer shortages, or long-lasting supply disruptions?

No, there is not.

Biogas production could provide a some protection. It does offer an alternative fertilizer source, and fertilizer quantities will rise, especially if governments were to subsidize biogas plant development.

How Biogas is Being Used in China

China is playing a lead role in the application of biogas – processes by which we can turn our waste, animal waste and food waste into a high-end, usable commodity.

The subject of using fecal matter as an energy source ranges from taboo in some societies, to wide acceptance and utilization in others. In China, it fits into the latter category.

In China alone there are a billion and a half people with just as many livestock, poultry and garbage dumps all providing methane feedstock daily. It's hard for China to sidestep the idea of turning something that was discarded into a commodity for electricity generation. China plans to have an installed capacity of bio-energy projects reaching 5.5million kilowatts by 2010, but jumping to 30 million kilowatts by 2020, a 600 percent increase in the next 11 years.

Biogas is a combustible mixture of gases produced by micro-organisms when livestock manure and other biological wastes are allowed to ferment in the absence of air in closed containers. The major constituents of biogas are methane (60 percent), carbon dioxide (35 percent) and small amounts of water vapour, hydrogen sulphide, carbon monoxide and nitrogen. Biogas is mainly used as fuel, like natural gas, while the digested mixture of liquids and solids ‘bio-slurry' and ‘bio-sludge' are mainly used as organic fertilizer for crops. Chinese companies are now finding numerous other uses for biogas, bio-slurry and bio-sludge in China.

This development touches on an important aspect of Peak Oil. In a world after peak oil  production, there will be less oil available. Fertilizer production may also be restricted by supply shortages. Therefore higher fertilizer prices, which means higher farming costs. All that must be passed along as higher food prices.

You could open Pandora's Box when explaining how oil-dependent the farming, transport and processed food production industries are. Increased transportation costs to move food stuffs from field, to factory to your plate. Fertilizer and pesticide rely on natural gas and oil based chemicals for production, and farm machinery is run on liquid fossil fuels. The simplest equation is: Higher crude oil prices = Higher food costs.

China began using biogas digesters in earnest in 1958 in a campaign to exploit the multiple functions of biogas production, which solved the problem of the disposal of manure and improved hygiene. During the late 1970s and early 1980s the Chinese government realized the value of this natural resource in rural areas and this was the first important step in the modernization of its agriculture.

Six million digesters were set up in China, which became the biogas capitol of the world incorporating the ‘China Dome' digester which is still used to the present day, especially for small-scale domestic use. China's 2003-2010 National Rural Biogas Construction Plan is to increase biogas-using households by a further 31 million to a total of 50 million, so the rate of use would reach 20% of total rural households.

By the end of 2006, the total number of families that use biogas reached 22 million, with a total annual biogas production of about 8.5 billion cubic metres and had built biogas pits for 22 million households in rural areas, and provided more than 5,200 large and mid-sized biogas projects based around livestock and poultry farms. The typical eight cubic metre biogas pits are able to provide 80 percent of the necessary cooking energy for a four-member family, according to The Energy and Zoology Division inside the Ministry of Agriculture. By 2020, about 300 million rural people will use biogas as their main fuel.

During the current, 10th, Five Year Plan, China is developing 2,200 grid power biogas engineering projects for wastes from intensive animal husbandry and poultry, treating more than 60 million tonnes of manure a year, that's in addition to the 137,000 installed digesters to treat sewage. According to The Chinese Academy of Sciences and Geography, the total annual production of manure and night soil could theoretically generate about 130 billion cubic metres of methane, equivalent to 93 million tonnes of coal and 80 percent of industrial wastewater can also be used to produce methane. The number of large scale grid power scale plants are planned to increase to 30,000 by 2030, a 15-fold increase.

As the idea of cleaning up the environment starts to take traction in China, dealing with sludge from urban and industrial wastewater treatment that has traditionally dumped into landfills, oceans and waterways is taking center stage with a catchy campaign “Recycle Waste into a Resource”. The Chinese central government is showing great interest in medium and large scale biogas plants and integrated agricultural and agro industrial biomass with waste handling plants to reduce water pollution.

To facilitate the usage of biogas the government had set up biogas technical training courses in Shanxi Province and in 2005 trained 6,000 farmers, 4,000 of which gained National Biogas Professional Technician Certificate. The Ministry of Agriculture which administers The Chengdu Biogas Scientific Research Institute (BIOMA) also operates an international training and research center in Chengdu, Sichuan Province. Farmers from Yunnan Province that graduated from the course are experimenting with a “four-in-one” biogas plant that incorporates a pigpen and a household latrine to provide feedstock, then uses methane to heat a greenhouse for growing vegetables and raises carbon dioxide within the greenhouse to boost plant yield.

Biogas feedstock programs throughout China are just beginning to utilize industry waste from other sources; alcohol production and paper mills. Tianguan Alcohol Factory, which consumes two million tonnes of shop-worn grains per year to produce denatured alcohol, is now recycling the dregs of the distiller to produce biogas in a 30,000 cubic metre digester, supplying more than 20,000 households or 20 percent of Nanyang city's population.

Hongzhi Alcohol Corporation located in Mianzhu, Sichuan Province which is the largest alcohol factory in south-western China, uses its industrial organic wastewater, sewage and dregs to produce biogas. The city of Mianzhu treats 98 percent of municipal sewage including wastewater from hospitals through digesters with a total capacity of 10,000 cubic metres.

Chenming Paper Co. which generates 300 tonnes of sludge a day, is adding its own start up biogas program using pulp wastes. The same goes for intensive animal husbandry on many large or medium size livestock and poultry farms in the suburbs of cities. China's power generation is starting to morph into local energy generation for local residents from local industry using local feedstock, which is a model we should get used to in a world of high energy prices.

Finally, biogas can be used to prolong storage of fruit and grain. An atmosphere of methane and carbon dioxide inhibits metabolism, thereby reducing the formation of ethylene in fruits and grains prolonging storage time and the same atmosphere kills harmful insects, mould, and bacteria that cause diseases.

My mind's eye sees a future where food storage will be in local communities as the Just-in-Time delivery system will encounter problems as fuel becomes more expensive and disposable income worldwide is reduced. I envision a return to a bulk delivery system of dry goods which will be weekly or bi-weekly that will require local communities to store their own grain and bulk food utilizing biogas to keep pests and rodents out of the food supply.

Tiny shipments as we are used to today will need to be restructured into a bulk delivery system, the concept of one box from one company half way around the world stocked on a store shelf should taper off with higher crude prices. Foods from supermarkets and hyper-marts packed in small individual boxes, bags or wrapped in plastic will have their own set of problems for delivery and manufacture to overcome. Which gives biogas an edge by offering solutions to two probable side effects in the future because of continuing upward crude prices, food storage and fertilizer.