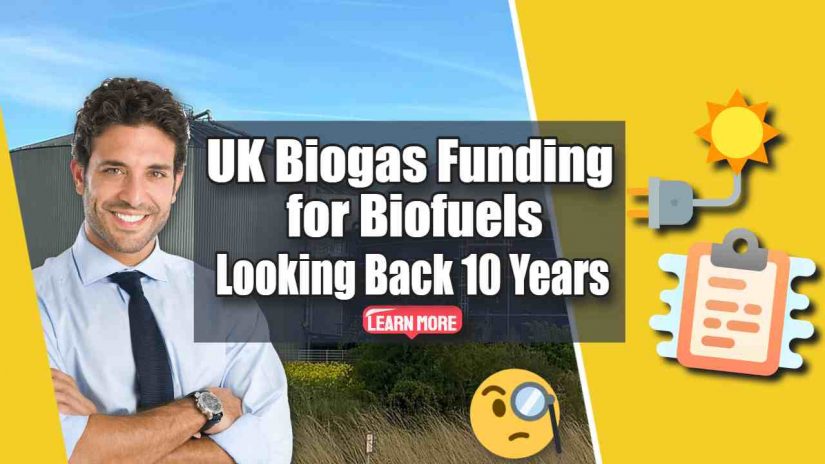 To understand the historical background to policy on UK Biogas Funding for Biofuels and CHP (Combined Heat and Power Installations), RO (the now-defunct Renewables Obligation), FiTs (Feed-in-Tariff closed) and the RHI (Renewable Heat Incentive – still current but for how long?*) it is necessary to go back 10 years to 2011 and the “Anaerobic Digestion – Strategy and Action Plan”. 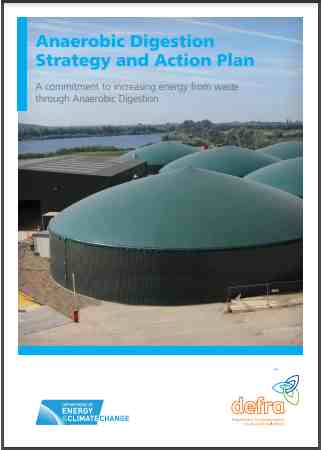 As of the time of writing, only the RHI remains, but even that incentive needs to be extended, or it will close.

The current situation is a far cry from the days that this, apparently still current, policy document was issued.

There was a rise in AD plant installations in the UK from a lamentably low starting point which was undoubtedly the result of this strategy and the incentives provided in the early years after 2011.

Read on for our breakdown of how it all happened.

* In 2021 the UK government announced an extension to the RHI. The RHI scheme now ends on 31 March 2022, unless extended again.

There can be no mistake as to the Conservative/Liberal coalition government's positive intention to back new biogas plants, starting with the report title on the cover:

This offers a local, environmentally sound option for waste management which helps us divert waste from landfill, reduce greenhouse gas emissions and produce renewable energy which could be used to power our homes and vehicles. Farmers and gardeners can also benefit from the fertiliser produced, returning valuable nutrients to the
land.

So, that was the historical policy framework on which the current UK renewable energy incentives, which we call “UK biogas funding incentives” in this article, are based.

In the early days the strategy worked well, and by 2017 had led to a rise from around 50 agricultural AD plants at that time to over 300, increases in UK biogas plants also occurred less dramatically in other sectors as is shown in our article here.

Unfortunately, the policy was disliked by government politicians who were in those days wedded to austerity policies and considered that nothing should take a higher priority than avoiding government spending. This view gained a strong voice when cut-backs were being applied elsewhere and yet spending was higher than expected on these popular biogas incentives.

To place this in context, the period 2011 to 2020 was a time in the UK when even the most basic social security benefits and were being cut.

The RHI suffered enormously from bad publicity when in Northern Ireland the lax implementation of the rules for RHI payments resulted in farmers reportedly heating leaving empty barns and leaving the doors open to maximise their RHI payments.

So. let's look at what the strategy was, and still remains: 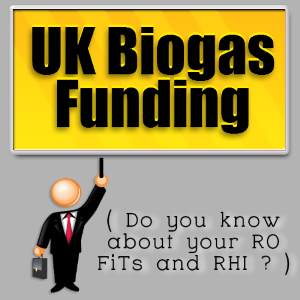 In short, the “Anaerobic Digestion Strategy and Action Plan” identified the three instruments through which government incentives for anaerobic digestion and biogas facilities would be funnelled, these being (in short) the RO FiTs and RHI, as explained in excerpts from the report below:

The RO provides financial support to generators of renewable electricity. AD is in the top banding at 2 ROCs/MWh (Renewables Obligation Certificates per megawatt hour).

Details of the forthcoming RHI were announced on 10 March 2011. The scheme will for the first time provide long-term guaranteed financial support for renewable heat installations. AD will be eligible to receive a tariff of 6.5 p/kWh over a 20 year period for biogas combustion in installations below 200 kWh and biomethane injection into the gas grid at all scales. …

The RTFO obliges fossil fuel suppliers to produce evidence that a specified percentage of their fuels for road transport in the UK comes from renewable sources, including biomethane. This can include the use of biomethane as a road transport fuel. Biofuel suppliers are awarded Renewable Transport Fuel Certificates (RTFCs) for the volume of renewable fuels they supply. These can in turn be sold on to any fossil fuel suppliers who have not supplied enough biofuel to meet their obligation for the year. In 2009/10, the second year of operation, the RTFO met its objective of driving a market for biofuels in the UK. 3.33% of the UK’s total road transport fuel supply was biofuel, which was slightly higher than the Government’s target of 3.25%.

The EU Renewable Energy Directive (RED) requires the UK to source 10% of energy used in transport from renewable energy by 2020. DfT has recently consulted on proposals to amend the RTFO to implement the transport elements of the RED.

The RED encourages biofuels from wastes, residues and lignocellulosic material (plant biomass that is composed of cellulose, hemicellulose and lignin) by double counting the contribution that they make towards national targets. The DfT implementation proposals involve introducing double certification for biofuels produced from wastes, residues and lignocellulosic materials including biomethane. The proposed change will give twice the financial support to these biofuels compared to conventional biofuels and no support to biofuels that do not meet the required sustainability standards.

In October 2014, rules were issued that to qualify for RHI incentives the industry must demonstrate that there will be real savings in greenhouse gas emissions, as shown in the following news article: 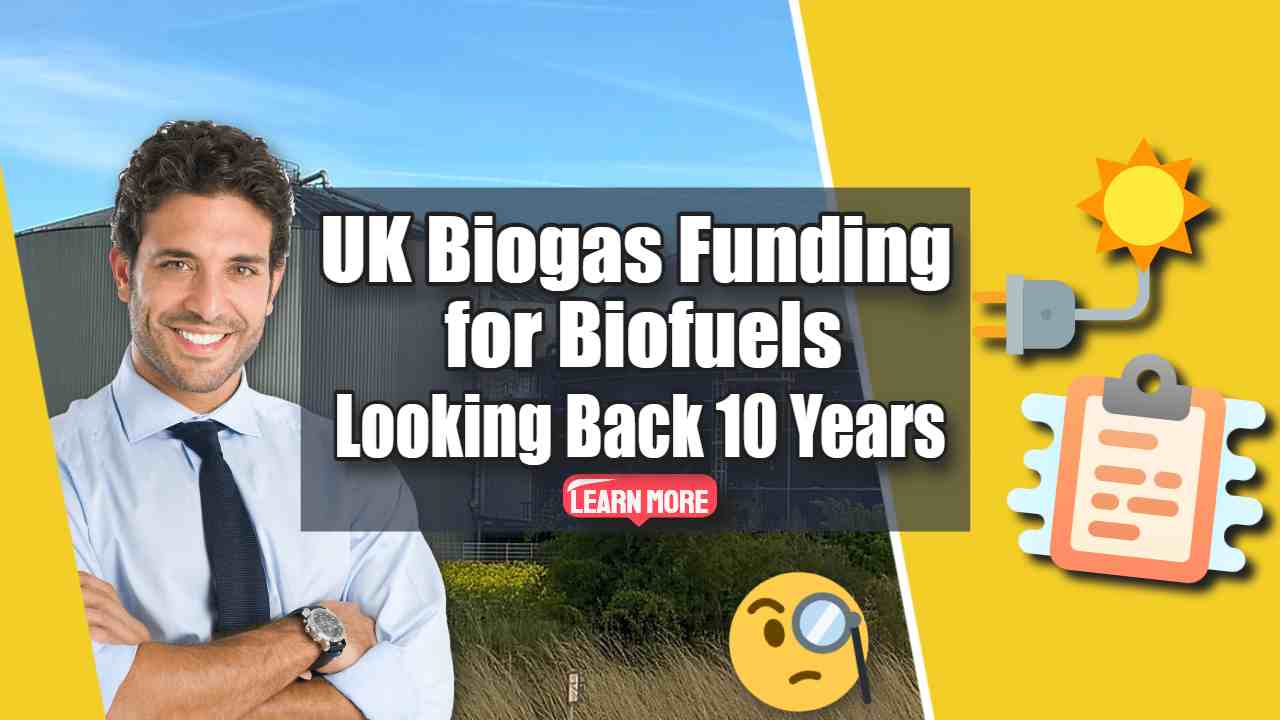 …The sustainability criteria for UK Biogas Funding were due to commence in April this year but will now apply from autumn 2015, subject to parliamentary approval. This means fuel suppliers will have a year to adjust their supply chains and learn to use new reporting systems…

“DECC's approach to RHI sustainability sets a challenging greenhouse gas emission target for biomethane plants but is in line with developers' expectations, and confirmation of DECC's approach will improve the confidence of industry and investors.”

Delivering UK green gas can decarbonise difficult areas such as heating and transport, as well as improving our energy security…

“The Renewable Heat Incentive budget is in place, but won’t deliver anything until the tariffs and rules are confirmed. The Feed-in Tariff has been squeezed almost out of existence, and with the Renewables Obligation having closed in March 2017 the government is leaving a black hole where policy for renewable electricity used to be.”

The best that can be hoped for is that the new Secretary of State for Environment, Food and Rural Affairs since the June 2017 election Rt Hon Michael Gove MP will soon bring into force an order which will reinstate a small RHI incentive for some AD facilities.

The story of the current (2014) UK Biogas Funding mechanisms provided by the UK Government started in 2007, with the 2007 Pre-Budget Report and Comprehensive Spending Review.

Here are various excerpts from the 2007 Pre-Budget Report and Comprehensive Spending Review October 2007, to give a flavour of the ideas behind the encouragement now being given to the renewable energy sector, which also benefits those who develop Anaerobic Digestion projects in the UK.

The period 2007/8 was a crucial period for renewable energy policy because its own Energy White Paper was published by the UK Government in Spring 2008. This is the origin of the policies now incorporated into the Climate Change Bill.

It was at that time that the government (then with a Labour majority) proposed improved ROCs and a new feed-in Tariff for Anaerobic Digestion processes.

In the Spring of 2007, the European Council agreed on an ambitious package of climate change and energy measures. The EU committed to reduce greenhouse gas emissions by 20 per cent by 2020, compared with 1990 levels, or by 30 per cent as part of a wider international agreement, and reaffirmed the central role that emissions trading must play in achieving these long-term goals.

The European Council also agreed on a target of 20 per cent renewable energy in overall EU consumption by 2020. The UK Government at that time was also working with the Commission and the other Member States to ensure that policies are effective in achieving the EU’s greenhouse gas objectives. They also sought to provide a credible path to the cost-effective delivery of renewable energy, in line with the Stern Review’s recommendations.

In 2015, it seems that at last that process is now nearing completion with the incentives in place, and implementation of new rules (Autumn 2014) for the RHI to ensure that there really will be at least 60% CO2 emissions savings from schemes that are paid the RHI.

The following are excerpts are taken from the report presented to Parliament by the Chancellor of the Exchequer by Command of Her Majesty, in October 2007. For further understanding of the origins of current policy in this area, we suggest that you visit the BBC website which contains many links to resources in this area.

“Combined heat and power (CHP) is the simultaneous generation of usable heat and power (usually electricity) in a single process. CHP is a more efficient way to use both fossil and renewable fuels and can be employed over a wide range of sizes, applications, fuels and technologies. The Government will aim to ensure that arrangements for future phases of the EU ETS continue to recognise the carbon savings that CHP delivers.”

The Government provides support for microgeneration through:

“The Renewable Transport Fuel Obligation (RTFO) will become the principal mechanism for encouraging the development of biofuels, leading to a significant reduction in emissions of greenhouse gases from the transport sector, by increasing the use of biofuels. The total net carbon savings associated were initially estimated to be in the region of 3.6 MtCO2 per year by 2010.

In June this year, the Government announced that from 2010 the RTFO would reward biofuels according to the carbon that they save. In addition, from 2011, the RTFO will also reward only biofuels that meet appropriate sustainability standards. These aims will enhance the environmental focus of the RTFO, directly benefiting those who produce and sell the most sustainable biofuels. With its additional environmental focus, the Government continues to believe that the RTFO will be the most effective mechanism for encouraging the use of biofuels. The Government has today laid in Parliament the draft RTFO Order to prepare for the introduction of the RTFO in April 2008.

The RTFO will provide all biofuel producers with a valuable incentive to produce the cleanest sustainable biofuels. The Government has been pursuing state aid clearance for an enhanced capital allowance (ECA) for the cleanest biofuel plant. However, it has become clear that in order to make it compliant, it would offer little value to the limited number of businesses who would be eligible whilst introducing considerable administrative complexity and uncertainty. As such, the Government has decided to focus on ensuring that the RTFO encourages the production of the cleanest and most sustainable biofuels, and will therefore not pursue state aid clearance for the proposed ECA. Biofuels producers can still seek financial assistance to ensure cleaner fuel production through investing in good quality CHP installations, which are eligible under the existing ECA scheme.”