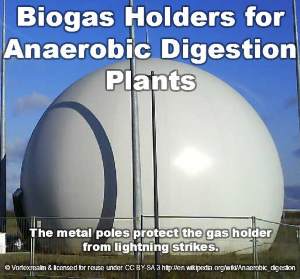 Providing biogas holders for anaerobic digestion plants is a growing business sector. Every biogas plant has a gas holder in some form. In fact you can very often spot an Anaerobic Digestion Plant by the presence of its spherical dome, or cylinder and these can at times be very striking architectural features.

But how much do most people know about biogas holders? I would wager that even those involved in biogas companies often don’t realise what technology sits beneath those futuristic shapes, hence, the name of this article to emphasise that the best of those domes are packaged with ingenious devices to carry out their hidden function.

So, what is their hidden function?

Watch the video below and scroll down and read the article that follows and you will discover the hidden function of biogas holders.

That main function of biogas holders is to control the gas, both upstream and downstream, by applying an adequate driving force (pressure) to carry the biogas around the system at the required pressure and flow rate.

It is also, crucially, the device that provides the signals to equipment, to turn them on or off, and to raise signals or alarms. In this sense, the best biogas holders are more of a process instrument than a storage tank. That is because the biogas holder is the controlling system which governs the satisfactory operation of engines, boilers and/ or waste gas burners.

Traditionally, the materials used to construct gas storage vessels, or biogas holders, have been steel and concrete. Those have for many years been the two main types of gas holder which used to be seen on sewage treatment works AD Plants. The main types in those days were:

There are other types which were sometimes used, such as dry-seal gas holders, with a membrane giving a seal between an upper biogas holding tank and a lower tank structure. But these were usually found only in the biggest sewage works.

As biogas technology has developed it has become more essential that gas storage is reliable, and low maintenance requirements are even more of an issue. The economic value and reliability of biogas holders is much more important now, as the value of the biogas itself rises.

Most of all has been the realisation that despite the effectiveness, in many applications, of anti-corrosion coating technology, one of the big disadvantages of using steel vessels for holding biogas is corrosion. Raw biogas is a unfortunately, a corrosive gas, containing varying amounts of hydrogen sulphide (H2S).

When the H2S in the biogas chemically combines with the water in the saturated gas, it produces weak sulphuric acid, which is particularly aggressive to steel. This can be overcome by coating the surfaces of the steel that are in contact with the gas with, for example, epoxy resin paints, which can be very effective. But, this is achieved at a high cost, and the results are never certain. Coatings do eventually become chipped, or become detached from the steel.

The modern double membrane biogas holder was developed in the 1980s, using fabrics that were developed in the architectural industry for canopies and other innovative roofs. The breakthrough came when it was realised that different fabrics could be combined in one membrane, and the development of dense PVC coatings also helped.

The development of dense PVC brought the solution to the inconvenient feature of fabrics, which was that they had previously been too gas permeable. Now combining materials produces membranes which are both effective barriers to the permeation of gas, and also very strong and long lasting, with very low maintenance costs.

What are these magic materials?

These materials are polyester based fabrics, with very high tensile strengths, coated with specialised PVC materials.

The interesting feature of a double-membrane biogas holder, such as the designs offered by gas holder manufacturer Vergas, is that the outer membrane, which is inflated by air, acts as the solid support structure.

It is the outer membrane which resists wind and snow loads, and a separate inner membrane, which actually provides the seal and support for the biogas inside.

So, in effect the structure comprises a gas-holding membrane within an air-supported outer shell. The materials are resistant to the acidic and unscrubbed gas; and are actually less expensive than steel. They are quick to manufacture and install and, more as maintenance-free as any structure can be.

The structure actually is a live structure as well though. Small fans produce an air pressure to keep the structure inflated to resist all climatic conditions, and that same air pressure is the driving force on the inner membrane, providing the motive force to push gas round the biogas system.

The operator of the plant can also make safe entry within the gas holders provided by Vergas. The company reports that it has made a point of giving the operator an easier life. Its range of gas holders provides a full sized man-access through the outer membrane into the space between the two membranes.

This means that suitably trained operators can inspect the gas holder without taking it out of service.

In addition, the availability of telemetry signals from an ultrasonic level detection system that detects the pressure level of the inner membrane, means that this modern biogas holder gives the operator a system that will give trouble free service for very many years.  The system includes a pressure level stabilisation system to control the air pump system to keep the biogas pressure inside constant while changing the air volume in the outer membrane area, and ensuring that the cover on top of the digester, or around the free-standing type, is always kept taught.

Vergas has reported that it has supplied biogas holders to many UK and overseas projects, including those for the Anglian Water Biosolids Programme at Cotton Valley, Kings Lynn, and Great Billing.