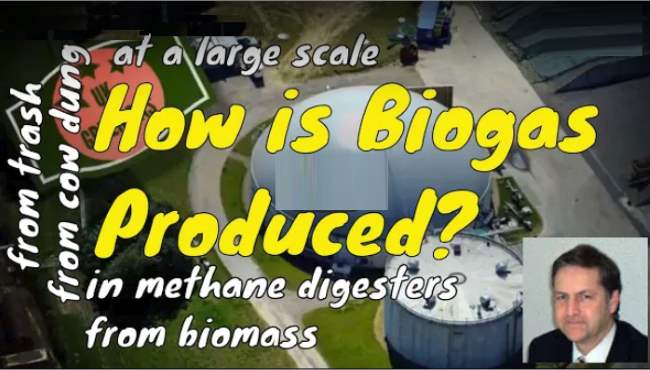 How is Biogas Produced? and Related Questions Answered 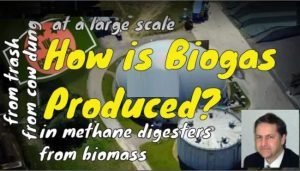 We found that a lot of people online would like to know, “How is Biogas Produced”. That's not a bad question, after all, it does seem slightly incredible that something like your old food waste could produce electricity!

That's why we wrote this article. We hope we answered your question here, but if not there are many other related questions such as:

The biogas produced is nothing but methane and carbon dioxide with some impurities.

The plant where biogas is produced is called a biogas plant. bio-gas is produced through a natural process called anaerobic digestion which turns organic waste; like animal waste and food waste  into two products:

Biogas is produced as the ultimate waste product of certain types of bacteria feeding off the input of biodegradable feedstock.

You can continue to read about this, or alternatively, watch our YouTube video on this subject of “How is Biogas Produced” (see below). Scroll on down past the video for more answers to this question, from the web, as well.

More specifically, biogas is produced during the methanogenesis stage of anaerobic digestion.

It is discharged by archaea, a micro-organism on a distinctly different branch of the phylogenetic tree of life to bacteria. Nevertheless, most people in the biogas industry still call these “methanogens” “bacteria”, and that includes us. (We know that to a scientist this is completely wrong, but we are practical people and wish to go with common usage of the word bacteria, just like almost everyone else.)

Biogas in the condition in which it is produced, is mostly methane and carbon dioxide, with small amounts of hydrogen and small trace quantities of hydrogen sulfide.

Most of the biogas is produced during the middle of the digestion process after a large bacterial population has grown in the reactor tank. Gas output tapers off as the putrescible material is digested and the feedstock is used up.

The gas is normally stored on top of the digester in an inflatable gas bubble or extracted and stored next to the facility in a gas holder.

“How is biogas produced in methane digesters?”

A methane digester is simply another word for an anaerobic digestion plant. Read our main answer, or watch the video for that answer.

“How is biogas produced in the UK”

In the UK biogas is produced using all the various methods (read our main answer), but in the UK most of it is produced commercially in large anaerobic digestion plants. Very little biogas is made in home biogas plants.

“How is biogas produced on a large scale”

There are many examples of biogas production on a large scale on this website. It is in most instances done by using the anaerobic digestion process in large AD plants.

“How is biogas produced in Nepal”

Most biogas in Nepal is produced in relatively small, home or community, biogas plants. The type of biogas plant is usually a buried brick chamber design of plant suitable for manure, dung etc.

“How is biogas produced from biomass”

How is Biogas Produced? – A Conclusion

The above reply in answer to the often-asked question; “how is biogas produced?”, is based upon the Wikipedia page for anaerobic digestion.

For more about biogas and the anaerobic digestion process, visit our website – anaerobic-digestion.com/hbp

We make videos and we'll make one for you. The price is lower than you think!. Just contact me by email: steve@ippts.com, or complete the form on our about us page.

What is Being Said Elsewhere on the web in Explanation of the Question “How is Biogas Produced?”

Biogas Can Also Be Produced Through Thermochemical Processes

Biogas is produced from various biomass sources through a biochemical process, such as anaerobic digestion, or through thermochemical means, such as gasification. With minor cleanup, biogas can be used to generate electricity and heat.

To fuel vehicles, biogas must be processed to a higher purity standard. This process is called conditioning or upgrading and involves the removal of water, carbon dioxide, hydrogen sulfide, and other trace elements.

The resulting RNG, or biomethane, has a higher content of methane than raw biogas, which makes it comparable to conventional natural gas and thus a suitable energy source in applications that require pipeline-quality gas. via Alternative Fuels Data Center

Biogas is a gas that is formed by anaerobic microorganisms. These microbes feed off carbohydrates and fats, producing methane and carbon dioxides as metabolic waste products. This gas can be harnessed by man as a source of sustainable energy.

Biogas is considered to be a renewable fuel as it originates from organic material that has been created from atmospheric carbon by plants grown within recent growing seasons. via Biogas | CHP | Cogeneration | Combined heat and power

How Is Biogas Made?

The main useful component of biogas is methane, which is produced during the digestion of organic matter in the absence of oxygen, along with carbon dioxide and trace gases such as hydrogen. Once it is cleaned, it can be used in the production of electricity or to power vehicles.

The production of biogas in landfills takes place underground, and the landfill must be at least 40 feet deep to support it. It is only practical to collect biogas from landfills containing at least a million tons of waste. The biogas produced in landfills is mostly used for electricity generation.

You can use many household organic “waste” materials to produce your own natural gas for cooking, lighting, and space and water heating. This gas, known as “biogas,” can also replace fossil-based natural gas to fuel an engine or an absorption cooling system, such as a gas refrigerator or chiller.

Biogas is a mixture of primarily flammable gases — mostly methane — along with carbon dioxide that forms anywhere organic material decomposes anaerobically (without oxygen), such as in water, deep in a landfill, or in the guts of animals, including you.

I prefer the term “generator” for the system because it conveys the intention of producing something. By constructing a home biogas generator, you can make enough fuel to at least provide your cooking energy. A family with modest daily cooking needs will at a minimum require the output of a warm, well-fed, 200-gallon (27-cubic-foot) generator. This much biogas will allow for about one hour of daily stove-top cooking. Start small to develop an understanding of biogas by making a small generator from a single 55-gallon barrel. Find plans in The Homeowner’s Energy Handbook.

A well-managed methane digester can produce approximately its own volume of biogas each day. Anywhere from 10 to 60% of the solids will convert into biogas during digestion, so expect between 3 and 18 cubic feet of available biogas energy for each pound of dry material. via Make a Biogas Generator 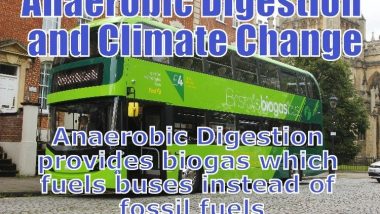 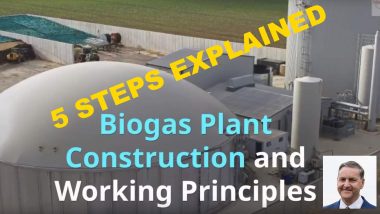