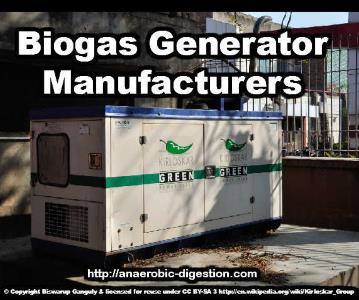 The main biogas generator manufacturers are:

How to Generate Electricity from a Biogas Digester

How is electricity produced using biogas produced by the anaerobic digestion process, is a common question asked. In fact there are now more than 150 searches per week on the phrase “electricity from methane digester”. So, in an effort to meet that demand on our web site I have written the article which follows.

For these conversion processes to be achieved, we need a suitable engine, and in principle there are two types of engine which have been used for biogas digester electricity generation, not including a hydrogen cell, and these are:

A gas engine is similar to a automobile car engine. It is an internal combustion engine which will burn the methane to convert the chemical bond energy of the gas to heat energy expanding the gases within the piston, driving the drive shaft and producing mechanical energy.

The mechanical energy in the rotating drive shaft is then coupled into an electrical generator.

The mechanical energy is utilized to drive the AC (alternating current) generator giving us electricity. Of course, the generator also has to be connected into an electrical power distribution grid, and to save on power loss during transmission through the cables the voltage is raised in a step-up transformer.

The cost of connection into the local power grid must always be considered when planning to build a biogas digester. At some locations this can be a very high cost, and this may have a big effect on the profitability of the digester until the capital cost is repaid.

A turbine converts methane into electricity through the same stages in a similar way. A jet engine is a form of turbine, and again the rotational energy is used to turn an electrical generator. Although turbines have been used they tend to be used only for very large power projects, and most biogas digesters are smaller than can economically justify a turbine.

It may seem a little strange to us to use gas in an engine, but the principle is actually very old and goes back to the first days of engine development. Early automotive engines used methane and coal gas. Petrol or gasoline usage was only developed later. Gottlieb Daimler and Carl Benz for example developed gas engines independently from one another in 1886, after they had been using gas engines. (The video below shows you this engine in action.)

When methane gas produced by a biogas digester is used for electricity production and the feedstock material is waste which would otherwise have been placed in a landfill a carbon dioxide emission credit reflecting the difference in greenhouse effect index between releasing landfill methane gas to the atmosphere and releasing the methane gas to the atmosphere as carbon dioxide, can be registered on emission credit markets in many countries.

Biogas digesters are already producing electrical power in many countries, and the number is growing. Starting recently, for example in the US, the methane created by decomposing garbage at the Winnebago Landfill was announced to be being piped to a new power plant at the site. There, four huge Caterpillar generators are using the methane to generate electricity, and it will be sent by power lines to users across a large region.

So, in order to prove the financial viability of a biogas digester project with electricity production we have to find out:

A Combined Heat and Power (CHP) system is always worth considering. The idea of CHP is that it uses the hot water otherwise wasted when the excess heat is cooled before it can go back into the circuit.

Without the “cooling” provided by CHP, this heat goes into the atmosphere without serving any purpose. It is simply discharged in a cooling tower. CHP avoids this waste when it, for example, sends the hot water from the engine cooling system to warm other buildings etc.

CHP is a good way to gain better efficiency of power use, and usually too it should bring in further income to fund the biogas digester operation. Just as a radiator captures the excess heat from a car engine, a CHP system captures heat from the engine which can be pumped into radiators in nearby homes and factories for their use.

Install a Biogas Generator to save Fossil Fuel Use

Biogas generate as much electricity as possible to minimise global warming, and help to conserve the planet for future generations.

For Clean Development Mechanism (CDM) participating countries that can show that biogas is being created from the diversion of waste away from a methanogenic landfill, the carbon reduction (CER) payable is actually a valuable income. It has been as high as 20 to 21 times the methane tonnage.

As a result , those biogas generator projects using landfill diversion in their baseline assessments will have a head start in terms of viability when compared with non-methane related CDM projects.