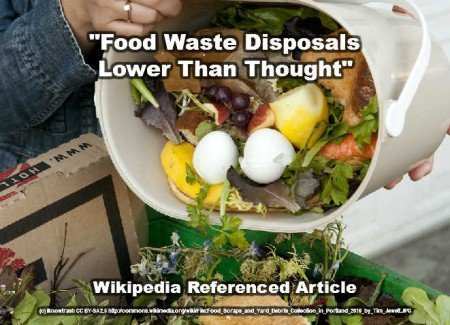 The amount of food waste being disposed of is lower than originally thought, according to the Waste and Resource Action Programme (WRAP).

The organisation's Chris Mills explained that less food waste is being generated than was expected, in a report at “letsrecycle.com”.

He told a conference for the Association of Organics Recycling: “The 140 kilograms average gives us a 62 per cent capture rate for food waste. We said we were collecting five kilograms per household, and we are finding the actual figure is closer to 3.8 kilograms.”

The most efficient measure was separate collections of food waste, followed by mixed green and food waste on a weekly basis. Mixed fortnightly collection performed the worst.

Mr Mills said: “Combined collections are not going to achieve high levels of diversion, with only 0.5 kilograms or 30 kilograms collected per household per year.”

Meanwhile, the Environment Agency has demanded that waste disposal authorities provide details of the final destination of their waste.

[box type=”alert” style=”rounded” border=”full”]This is a transposition of an article which was originally published on the “Letsrecycle” web site, no longer available, and repeated on the Energy Saving Trust's website. It was flagged as a broken link in the references section of the Food Waste in the United Kingdom page in Wikipedia (En), so we ran searches for other copies, and one was discovered, but that page was found to have been only partially active (from a feed), and was displaying with disjointed and poorly formatted text. The meaning of the content on this page is as the original although the grammar has in parts been corrected, and other wording may differ slightly from the original.[/box]