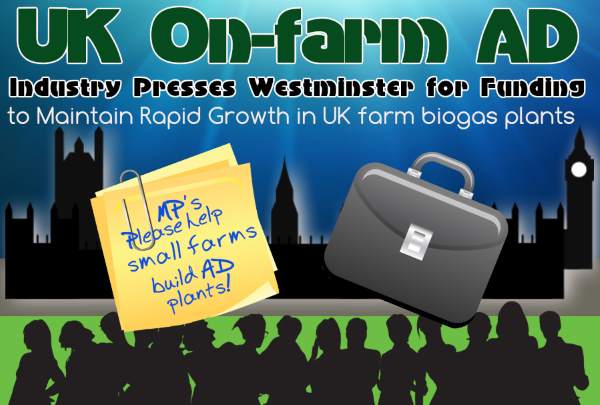 The UK's On-farm Anaerobic Digestion Community has been working in the last few days to publicize the many benefits of their process which produces biogas. Government seed funding of biogas plant projects can help in a big way, to reduce greenhouse gas emissions from fuel use, in provides jobs, and reduces waste sent to landfill. All these are benefits that it has been publicizing to the government ahead of the annual budget statement later today. The continued adoption of anaerobic digestion, and in particular on-farm anaerobic digestion at small farms at the rate that these plants were being commissioned last year, would maintain a growth surge which it is important continues, so that the UK can meet its commitment to reducing its Carbon Dioxide emissions.

The urgency for reducing Carbon Dioxide emission reductions globally, could not be more urgent. The rise in average global temperatures this winter has been faster than ever before, in over 100 years of collecting climate data in the UK. As if that was not bad enough, the month of February saw the highest monthly rise in global temperatures ever recorded, pointing out the need for vastly more of the green sustainable energy, which the anaerobic digestion process provides. Read on and read our 3 example articles below, which show how  The UK's On-farm Anaerobic Digestion Community has been publicizing their industry, and how very welcome research funding is already in place for the next 5 years, some of which will be spent on new biogas technology research:

Today in the House of Commons almost 150 farmers will join around 90 MPs and Peers at a parliamentary event aimed at championing the anaerobic digestion industry.
Farming representatives from across the UK will join the farming themed event to raise awareness about the technology's value to their businesses and the rural economy, and to petition politicians for more targeted support for on-farm Anaerobic Digestion operators.
ADBA's Chief Executive, Charlotte Morton, commented:
“Today's event is the AD industry's first ever reception in the Houses of Parliament, and the overwhelming political interest we have received – with almost 90 MPs and Peers requesting to join the event – could signal a marked shift in recognition for the industry's considerable value.
“A growth surge in on-farm AD, with a doubling of plant numbers to 172 over the last two years alone, high lights how much farmers are recognising the benefit of integrating AD into their businesses.
“This event capitalises on that success by pulling together AD's political representatives from across the spectrum to learn first-hand how the technology incorporates easily into existing businesses, helping to improve farming resilience, generate vital baseload energy, improve food production through sustainable crop rotation and nutrient-rich biofertiliser, and contribute to decarbonising the farming, heat and transport sectors.”
To build on this momentum, however, the industry is now seeking support for the considerable non-energy contributions that benefit every UK household, but for which farmers do not receive any recognition.
We want to see Defra and DECC working closely together to assess how government can support small-scale AD [on-farm anaerobic digestion] to continue to improve rural farming businesses' resilience in a policy environment where dwindling incentives challenge its commercial viability at the very point at which it is scaling, and when the Committee on Climate Change are urging action to decarbonise farming.”
The Shadow Farming Minister, Nick Smith MP, added:
“Anaerobic digestion could be an important tool in our bid to leave this planet as healthy as we found it.”
“Inedible food bound for the scrap heap being turned into cleaner, greener energy is exactly the sort of thinking we should be taking into all walks of life.”
“With farm incomes struggling, I would be happy to see more small farms access this technology if it meant less of our waste going to waste”
The Chair of the influential House of Commons Select Committee responsible for scrutinising Defra policy, Neil Parish MP, concluded:
“Anaerobic digestion is a good clean energy alternative that sees us using more of our planet’s resources and wasting less food. This will enable us to live in a cleaner and greener environment both now and in the future.” via Farming UK News – Farmers rally to support anaerobic digestion at Parliament

Government to invest record £26 billion in science by 2021

The Government has announced that it will be investing £26.3 billion in science up to the year 2021. This is approximately £6bn per year.

“From the invention of the lightbulb to the creation of the world wide web, UK scientists have been instrumental in many of the world’s most significant discoveries, and we are determined to continue this legacy on a global scale. In a time of tight control over public spending, we have guaranteed record investment for UK scientists so they can help us tackle climate change, produce disease-resistant crops and cure rare diseases. The government is delivering a decade of sustained investment in science. As long as scientists continue to discover, innovate, and drive economic growth, we will continue to stand right behind them.”

There would clearly never have been an Anaerobic Digestion industry without scientific understanding, particularly in the biological and engineering fields. So, this news must be welcome as funding streams supporting AD [and on-farm anaerobic digestion] can be continued. The industry is in need of further research breakthroughs as we grapple with a fast-changing policy environment. via Government to invest record £26 billion in science by 2021

As the Chancellor prepares his budget statement for Wednesday, the AD industry has called for him to recognise the global opportunity for UK companies and researchers in biogas, digestate and bioproducts.
In a policy paper to the Department of Energy & Climate Change (DECC), ADBA has called on government to allocate at least £25 million of an increased innovation programme worth £500 million over the next five years. To support this call, ADBA will use its sixth Research and Innovation Forum on 6-7 April in York to further develop the AD industry’s world-class academic base. [It will also,] assess how this additional funding could best support the UK in becoming the market leader in anaerobic digestion and bioprocessing.ADBA’s Chief Executive, Charlotte Morton, commented:
“The potential export value of anaerobic digestion technology is over £2 billion per year for a decade, and yet UK exports are currently estimated at just £50 – £100 million.”
“That is why we are calling on government to allocate £25 million of the increased innovation programme for demonstration projects, such as power-to-methane and digestate processing.”
“Supporting such new technologies through industry could bring ways of sustaining the sector with reduced reliance on financial mechanisms, allowing AD to remain the most cost-effective method of producing home-grown green gas and electricity, and contributing to the UK’s 2020 renewable energy, recycling, decarbonisation, and climate change targets.“
“By using the relationship between research and industry at our R&I Forum at the University of York on 6-7 April to develop a strategy for how this additional funding could be best deployed, together industry and academia can encourage manufacturing and pave the way for the UK to become a world leader in anaerobic digestion.” she said, via Farming UK News – Calls for 25m research funding from government to boost anaerobic digestion industry
Will the UK's On-farm Anaerobic Digestion industry get the funding assistance they seek? Watch this space, and we will provide an update soon. 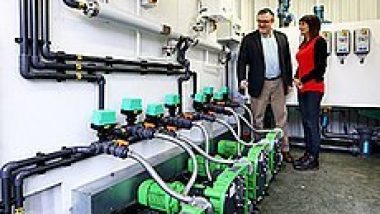 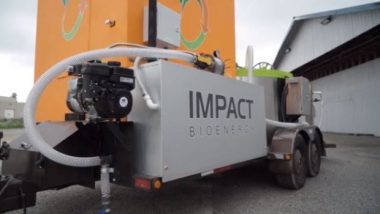