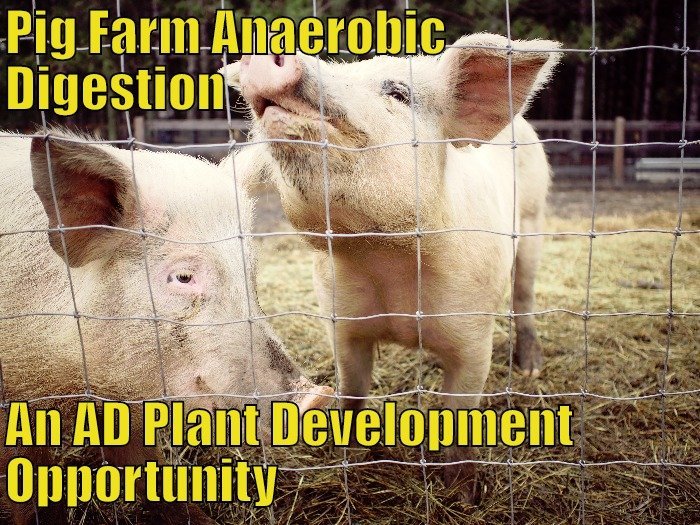 Pig farm anaerobic digestion has been in the technical news his summer and autumn. In this article, we have rounded up some of the recent articles posted on the subject, which show just how global the subject of pig farm anaerobic digestion has become. It is our view that, while most on-farm biogas plants built to date have focused on using, maize, dairy wastes, and especially manure, as their source of feedstock, many other waste feedstocks remain underrepresented.

In particular, there is room for many more developments in pig farm anaerobic digestion, using waste biomass from piggeries (hog production) and meat production waste. There are many benefits from this, and AgSTAR, the US government USDA funded research body has been pointing them out, as in the article extract that follows:

AgSTAR, the biogas recovery division of the U.S. EPA, noted that [ pig ] hog farms have a great potential to benefit from anaerobic digestion.

Anaerobic digestion is an important technology across a wide range of industries. Meat producers [ and piggeries ] in particular are increasingly adopting it because it helps operations both dispose of waste and become more energy-efficient.

Anaerobic digestion is used to extract biogas — a mixture of methane and carbon dioxide — from organic wastes. Digestate, a byproduct of the anaerobic digestion process, is a stable, fermented waste that can be reused as a fertiliser.

Organic wastes from food and beverage processing are especially suitable for waste-to-energy treatment. Waste streams may include process wastewater, whey, primary sludge from wastewater pretreatment, and manure, as well as slaughterhouse wastes and many other biosolids.

Anaerobic digestion is an important technology for effective, efficient food production. With it, users can reduce water consumption, reduce wastes, and generate energy. There is also the potential for saving money and, in some cases, creating new revenue streams. When combined with other technologies, anaerobic digestion, waste-to-energy treatment, and biogas production can be very cost-effective and environmentally friendly solutions even for the most difficult-to-treat waste streams. via RWL Water

Clearly, AgStar's message was not needed before one Australian pig farm anaerobic digestion project, went ahead. Construction is already well advanced on their new piggery biogas plant, as follows:

GD Pork was granted approval for a $14.5 million expansion to their Kojonup facility, 250 kilometres southeast of Perth, in August last year. The expansion is expected to allow for site production to increase by double, to about 75,000 pigs a year.

But, the increase in production has led the company's managing director Torben Soerensen to look for new ways to supply the site with power.

“We're putting in an anaerobic digester tank, so basically a big tank where the waste from the pigs can go in,” he said. “The bacteria break it down [and] that creates methane which is then put into generators and it can create electricity that way.” The biogas facility is anticipated to enable the site to be fully self-sufficient.”

However, he said what they did not use would be burned off as gas instead. Mr Soerensen, who is originally from Denmark, said the use of biogas facilities was big in other parts of the world but had not yet been picked up in Australia:

“It's not a new technology; it's been used overseas for the last 20 years,” he said. “There have been similar systems [in Australia] where they do it in covered ponds, but this is the one where it's actually a digester itself.”

He said it would be cost-viable for most West Australian piggeries:

“It will save us on electricity, but it also has some investment costs involved so at the end of the day, it's not good business; it's not why we do it”, he said. “Waste is obviously an issue with piggeries and if you don't do anything, you just stockpile your waste.” “It's a nuisance for neighbours and smells.” “By putting it through that process, you also eliminate the smell from the waste so that's a big plus.” “Then it just makes sense because otherwise, we would have to generate electricity from diesel, and if you look at it that way, then, of course, it's saving us money.”

The facility is expected to be operational by the end of the year (2016). via abc.net.au

Meanwhile, in the UK, a scientific study has revealed that:

The research also showed that bio-reduction through AD could provide a solution to on-farm storage or disposal of pig carcase material which could reduce the costs of fallen stock collection and reduce vehicles driving between farms.

The first stage of the research established that the AD process could significantly reduce the number of particularly resilient pathogens in PCM and that it can generate considerable quantities of biogas.

The second stage, funded jointly by Defra and BPEX, is aimed at reducing fossil fuels by helping towards AD being used as a self-sustaining on-farm biogas system for storage or disposal of PCM.

Before being developed commercially, AD must provide a positive outcome which can then be approved by the EU.

Finally, a pig farm anaerobic digestion plant has been commissioned in Croatia:

According to the manufacturer, the farm waste processing plant perfectly suits the farm's cycle of food production from the liquid manure produced by around 3000 pigs.

WELTEC explained that even before joining the EU in 2013, Croatia had committed itself to the EU climate protection goals in order to establish the preconditions for obtaining subsidies for decentralised energy projects in rural areas.

With these grants and fixed feed-in tariffs for green power, the country’s government intends to increase the share of renewable energy by about 30% by 2030.

The framework conditions for this were said to be excellent, as Croatia has a healthy supply of biomass – one of the country's most important renewable energy sources.

Like a Pig in Muck
The German firm explained that for this project pig breeder Dalibor Vrček's family-managed farm also had ideal conditions for establishing a synergy of animal husbandry and biogas generation.

In addition to the subsidy for the construction, the operator was able to base his investment decision on a fixed feed-in tariff of € 0.19 per kilowatt-hour of power fed in over the next 14 years.

According to WELTEC, this income forms a solid basis for diversifying the farmer’s business. via WELTEC Completes Pig Farm Anaerobic Digestion Biogas Plant in Croatia

There appears to be a big potential for many more pig farm anaerobic digestion plants in the near future, around the world. 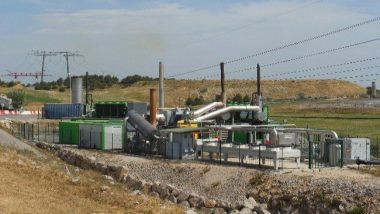 New UK Government RHI Scheme and the Future of Biomethane 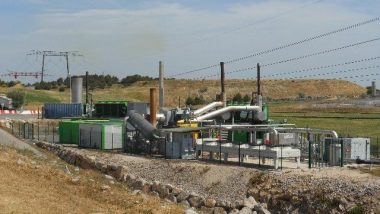