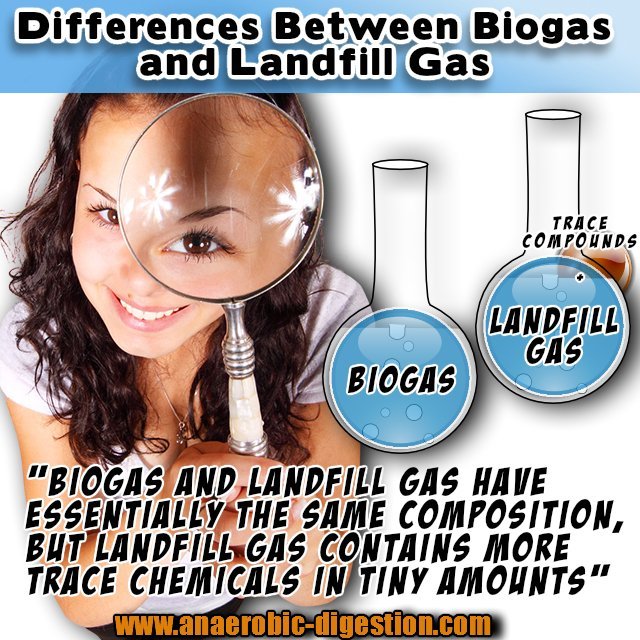 What is the Difference Between Biogas and Landfill Gas?

We saw that a question being asked on the forums is, “what is the difference between biogas and landfill gas?”, so we thought that we would write this article to explain.

Definitions of Biogas and Landfill Gas

Biogas is the raw unfiltered and un-purified methane gas from the anaerobic digestion process. It is the gas from biogas plants ranging from home-sized units to those huge biogas reactors you see on farms.

The Similarities Between Biogas and Landfill Gas

Biogas and landfill gas are essentially created by the same process, the anaerobic digestion process, so they are very much the same in their basic composition and calorific value when burnt.

The Differences Between Biogas and Landfill Gas

However, there is a difference between biogas and landfill gas which becomes very important when these gases are used as an energy source, and burnt or processed to purify the methane into pure CH4. The difference is that landfill gas has many more “trace” impurities than AD plant produced biogas.

Biogas made from an anaerobic digestion plant which is fed by pure organic biomass won’t normally possess the many “trace” (small %age quantities) chemicals that are invariably found in any landfill gas.

However, anaerobic digestion plant biogas may include trace impurities, derived from the feedstock contents. For this reason, it is always worth obtaining a lab test analysis of the trace compounds found before burning it in a gas-engine to generate power, or before sending that gas to be purified in a biogas to biomethane purification system.

Taking that step at an early stage of any biogas project, particularly for a landfill-gas biogas, could have very large benefits later from anticipating the costs and downtime associated with landfill gas engine maintenance.

Probably the best known, and very troublesome, trace organic compound in landfill gas is siloxane. Siloxane causes damage to reciprocating gas-engines, because it forms a hard deposit within the engines. This persists and will eventually cause a failure of the generating equipment, unless it is either removed by purification before the gas enters the engine, or gas-engines are regularly stripped down and cleaned.

We found more information on biogas in the following quotation, which may help readers understand biogas in more detail:

“Biogas typically refers to a mixture of different gases produced by the breakdown of organic matter in the absence of oxygen. Biogas can be produced from raw materials such as agricultural waste, manure, municipal waste, plant material, sewage, green waste or food waste. Biogas is a renewable energy source and in many cases exerts a very small carbon footprint.

Biogas can be compressed, the same way natural gas is compressed to CNG, and used to power motor vehicles. In the UK, for example, biogas is estimated to have the potential to replace around 17% of vehicle fuel. It qualifies for renewable energy subsidies in some parts of the world. Biogas can be cleaned and upgraded to natural gas standards, when it becomes bio-methane. Biogas is [classed] as a renewable resource, because its production-and-use cycle is continuous, and it generates no net carbon dioxide. Organic material grows, is converted and used and then regrows in a continually repeating cycle. From a carbon perspective, as much carbon dioxide is absorbed from the atmosphere in the growth of the primary bio-resource as is released when the material is ultimately converted to energy.” Via biogas_composition.html

Manage Cookie Consent
To provide the best experiences, we use technologies like cookies to store and/or access device information. Consenting to these technologies will allow us to process data such as browsing behaviour or unique IDs on this site. Not consenting or withdrawing consent, may adversely affect certain features and functions.
Manage options Manage services Manage vendors Read more about these purposes
View preferences
{title} {title} {title}
0 Shares
Share
Tweet
Pin
Share
Share