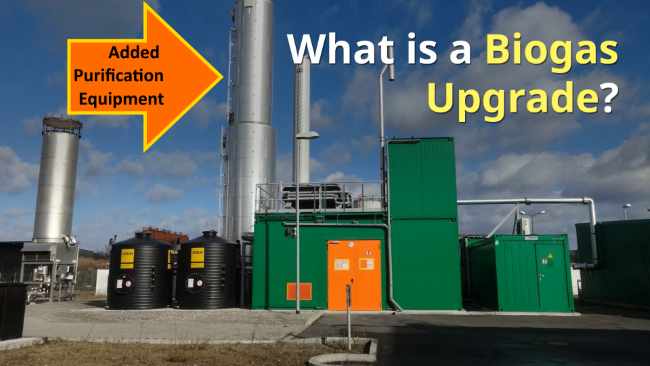 A Biogas Upgrade is Anaerobic Digestion Industry talk for Biogas Upgrading to raise the quality of the raw biogas to the equivalent of natural gas.

A biogas upgrade (upgrader) is a facility that is used to concentrate the methane in biogas to natural gas standards (CNG). The system removes carbon dioxide, hydrogen sulphide, water and contaminants from the biogas. One technique for doing this uses amine gas treating. This purified biogas is also called biomethane.

“Biomethane can be used interchangeably with natural gas.

Raw biogas produced from digestion is roughly 60% methane and 29% CO2 with trace elements of H2S. It is not high quality enough to be used as a fuel gas for machinery. The corrosive nature of H2S alone is enough to destroy the internals of a plant.” via en.wikipedia.org

Running an advanced biogas facility with a biogas upgrade stage at the end of the normal biogas process, is a simple concept, and one which is increasingly being adopted. It is one in which raw biogas from a biogas (anaerobic digestion) plant at about 60 % to 70% methane content is “upgraded” to a much higher quality premium product. The biogas upgrade product has an inexhaustible market, at greater than 95% methane (CH4), because it can be used instead of natural gas, and is renewable.

During the upgrading process, CO2, H2S, and contaminants at low concentrations called “trace contaminants” are also removed, and the resulting product “biomethane“, will increasingly be sold in the future, for use as a transport fuel, but most is now sold as an alternative to natural gas for domestic use.

Watch our video which explains the best/ most used available upgrading technologies. Please return after viewing the video, SCROLL DOWN, and read the full article below:

Many biogas upgraders talk about injecting their biomethane into the gas grid. All that means is that rather than generating electricity from their biogas plant output, they upgrade their biogas, and raise the pressure to the pressure of their local gas main. The pressurised biomethane is then pumped directly into the natural gas main for use by users nearby.

In the rest of our article which follows, we have researched the products offered by some of the companies which offer biogas upgrading technologies which come in a variety of forms. We hope that you will find this a useful resource to more fully understand the various methods and technologies of biogas upgrading which are on offer:

Any Biogas Upgrade is Available Via Multiple Technologies

Four main technologies are used to create RNG from biogas: Membrane Separation, Pressure Swing Adsorption (PSA), Amine Scrubbing and Water Wash (or water scrubbing). These are usually deployed individually but can sometimes be installed in a series with one another, as needed for the given project requirements.

The PSA and membrane systems are somewhat similar as both are “dry” upgrading systems that involve a physical separation of the CO2 and CH4 molecules based on the molecule’s size, driving pressure and ionic charge. Water wash and amine systems are similar in that they are both “wet” upgrading systems and involve separating the CO2 from the CH4 by solubilizing the CO2 in a liquid solution while allowing the CH4to pass.

The pole charge and size of CO2 and CH4 molecules are key to how to get them to separate in a mixed gas stream. Carbon dioxide has carbon in its centre and an oxygen atom bonded to each side to make for somewhat of a linear-shaped molecule. The oxygen atoms have higher electronegativity thus hold electrons more tightly. This results in the CO2 having negative charges at the oxygen ends of the molecule. Carbon dioxide is more polar charged and a smaller molecule than CH4.

Methane has a carbon atom at its core and four hydrogens placed uniformly around the centre atom. It’s a very uniform shape and has no appreciable ionic charge. Carbon dioxide is a smaller molecule than methane.

The difference in size, shape and charge properties allows for both physical and chemical separation.

The biomethane produced with biogas upgrading technology has the same specifications as natural gas, which makes it fully compatible with the existing natural gas infrastructure and applications. Optionally, the CO2 by-product can be recovered for use in a variety of applications, providing plant operators with an additional source of income. via UPGRADING – Pentair

Nowadays, the biogas production and upgrading process are proven technologies; they are reliable, efficient and safe with the advantage of full integration into new and existing power and heat generation plants.

Pioneer in the biogas upgrade industry Carbotech, is a recognised pioneer in Europe when it comes to the cleaning and upgrading of biogas and one of the leading suppliers of complete biogas to grid injection systems. The company says that it has been actively engaged in the biogas industry for more than 30 years. Furthermore, Carbotech draws on extensive experience in gas purification and gas generation processes, such as the production of hydrogen and nitrogen.

For many years, Carbotech biogas upgrading plants have been in operation in numerous European countries with reliable, highly efficient and low operational costs for the processing of biogas to biomethane as well as the gas to grid injection.

The patented pressure swing adsorption (PSA) process developed by Carbotech is simple and distinguished by its low energy consumption during the biogas upgrade.

As a result, the company says that most of the biomethane gas to grid projects in Germany are equipped with the Carbotech PSA system. Simple and reliable technology The biogas upgrading process from Carbotech is a simple procedure: The raw biogas is ﬁrst compressed, following the condensation via Biogas upgrading plants – BIOFerm™ Energy Systems

One of the major product lines DMT Environmental Technology offers is the Carborex MS. This system upgrades biogas to pure methane. The biomethane can be supplied to the national gas grid, or be compressed to Natural Gas (Carborex CNG), to be used as vehicle fuel.

DMT’s Carborex MS in Poundbury was the first commercial biogas upgrading system in the UK and the first in Europe.

DMT is now the largest producer of biogas upgrading facilities in the world with membrane technology. We offer the Best Available Technique (BAT) with the highest uptime and easy to operate systems. via  DMT Clear Gas Solutions

Biogas meets water and then there is green gold says Biogas Upgrading Malmberg. in the Malmberg COMPACT water scrubbing process, Malmberg says that it has an upgrading process which they describe as simple, reliable and works forever.

Incoming biogas is compressed and meets the water trickling from the top of a column. CO2 and H2S are absorbed by the water while the methane rises to the top, is dried internally and ready to be either injected into the natural gas grid or used as vehicle fuel. via Malmberg

Greenlane Biogas – A Pioneer in the Development of Biogas Upgrading Technology

Greenlane Biogas of New Zealand, describe themselves as a pioneer in the development of biogas upgrading technology over 25 years ago and today has the largest installed base of upgrading units spread right across the world. The clean biomethane gas produced can be used to fuel public transport fleets, national power grids and communities. via Biogas Upgrading – Greenlane Technologies

BIOFerm Energy Systems is a US company that provides turnkey anaerobic digestion and gas upgrading systems as well as project development and consulting engineering services to the North American biogas market. 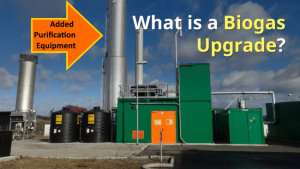 Biomethane is an attractive alternative to fossil fuels. Its production is environmentally friendly, efficient and reliable.

Biogas production is increasing, globally, and the interest for biogas upgrading to utilise the gas as vehicle fuel or in other traditional natural gas applications increases as well.

The mature technologies will see a market with more and harder competition as new biogas upgrading technologies such as cryogenic upgrading are established, and other technologies optimize the processes to decrease operation costs.

Important issues for the future development of the biogas upgrade market relate to the implementation of new policy instruments.

The work with the new European standard requirements for gas distributed through the existing gas grids is one issue that possibly can have a large effect on the possibilities for distribution of upgraded biogas. However, the future will most probably be fuelled by increasing demand for upgraded biogas. via Review of commercial technologies