Anaerobic Digestion Cost – Plus Gate Fees and Other Rules of Thumb

In this article, we look at how much does anaerobic digestion cost in general. We also discuss the gate fees that food waste digesters charge and other general rules of thumb to help those that seek help with assessing biogas digester costs.

A commercial microbial anaerobic digester can cost anywhere between $400,000 and $5,000,000 to build, depending on the scale of the facility and the technology used. The average cost of an anaerobic digestion unit on a farm is roughly $1.2 million dollars.

In very broad terms a medium-sized commercial on-farm digester with 250 cows costs about $0.30/kWhr to operate all-in, in 2022. The income from electricity sales will be about half that.

Upgrading to biomethane adds to costs but can in the right circumstances repay the running costs outright.

For electricity generation profitability relies on additional income from other sources such as:

With creative thought and even by coming up with a unique solution completely “out-of-the-box” it is very often possible to ensure the profitability of a biogas plant.

In 2022 and during the covid pandemic recovery period, all estimates are especially difficult due to wildy fluctuating non-renewable fuel prices. The cost of anaerobic digestion varies widely according to many factors which include the technology used, the purity to which the products are produced, the sources of the feedstocks/ and the purpose of the AD plant. There is a general lack of information available to the casual onlooker about anaerobic digestion plants and process costs.

As in many other industries, this information is usually held by the plant operators, and the contractors that design and build these plants. In both cases, they seldom (if ever) release their costs to the public, and regard the information as commercial, preferring to negotiate their prices with potential organic waste disposers, on a case by case basis.

One area in which anaerobic digestion costs are available is in the form of the gate fees charged by biogas plant operators, to those that wish to dispose of the organic waste to their plants.

What is a Gate Fee?

Wikipedia provides a good definition of the concept of a gate fee: 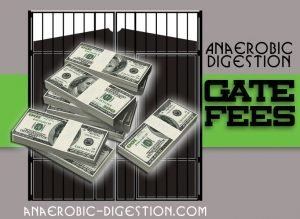 The imposition of a gate fee was first brought in for the landfill tipping of waste. It is usually collected, for example, in the case of a landfill to cover the costs of opening, maintaining, and eventually shutting the site. It could also include any landfill taxes that apply in the area. The gate fee is distinct from the rubbish removal/ waste collection fee, which is a charge imposed on residents in areas where waste collection is not included in local taxes, such as Ireland.

But surprisingly, this definition does not mention one very important part of any gate fee, which is also the profit margin that all landfill operators will, of course, seek to maximise. The element of profit within any gate fee will be a function of the local market, and in particular, the cost of competing methods of waste disposal.

Waste fed, anaerobic digestion plant business economics are usually based on a charge being made to the organisation which deposit waste at the AD Plant gate for disposal. That's also known as the “gate fee”. AD Plant operators do also usually also make additional income from the sale of energy, and wherever possible, other by-products such as biogas, and digestate.

To gain an up to date UK perspective on the relative “gate fee” cost of anaerobic digestion we recommend a visit to www.letsrecycle.com and then click on their prices menu.

The UK government also reports on UK Gate Fees (updating their data approximately annually), including AD plant gate fees, as shown in the purple line in the chart below: 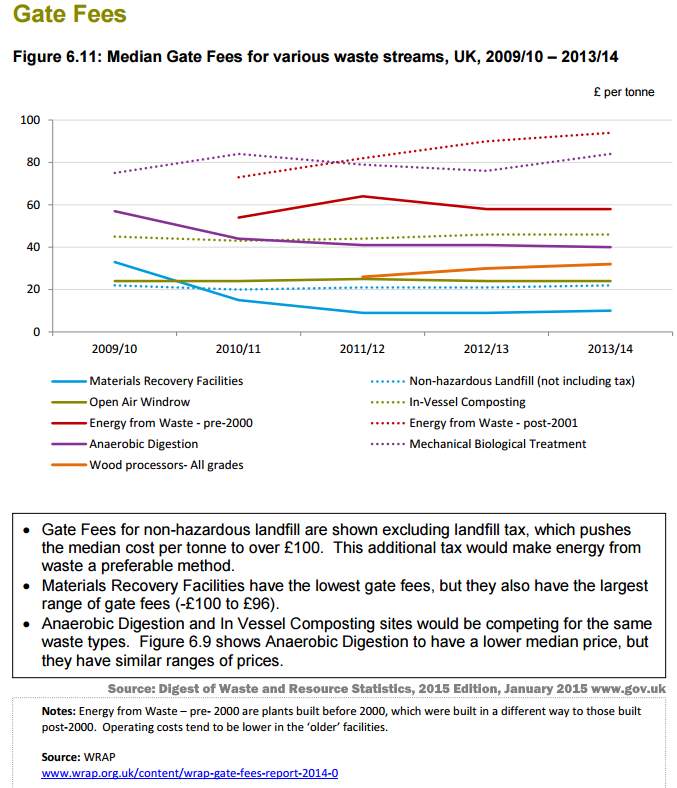 For the latest UK government data, the updates to the above chart should be available here.

One thing about the above chart stood out to us. We suggest that you look at the above chart, and also read the bullet point notes beneath it. If you do that, you will see that for those that wish to dispose of solid biomass, sending it to an AD plant at below £40/tonne, is far cheaper than landfill disposal at over £100/tonne.

While writing this article we searched for other sources for approximate rules of thumb methods for assessing anaerobic digestion costs, and we found the following cost information, provided in the Biomass Magazine:

An anaerobic digester producing biogas coupled to a generator can be a good long-term investment for the right agricultural business or operator of any process that produces constant organic waste as a by-product.

As a fuel, methane biogas will be less expensive than diesel or ordinary natural gas (CNG) generators. The best examples of anaerobic digester implementation can result in a facility paying nothing for fuel.

Facilities that need to replace a Genset burning biogas that has reached the end of its useful life should evaluate all possibilities, including a biogas digester type.

When weighing the investment risk associated with adopting an Anaerobic Digestion process against the benefits, the decision should ultimately be based on what works best for a specific site and operator.

The following cost estimates for establishing anaerobic digester systems are based on manure-fed on-farm digesters.

The cost of installing an anaerobic digester alone is estimated to be between $400 and $700 per 1000 pounds of cattle weight.

The cost of installing an anaerobic digester system on a dairy farm that produces power is estimated to be between $800 and $1200 per cow. The engine-generator can account for up to half of the project's total cost.

Aside from installation, insurance, operation, and maintenance costs must also be considered. Annual operation and maintenance expenditures for a small digester might be as low as $11,000 and as high as $51,000 for a large plant (all prices current circa 2000- 2010).

Operating costs have a greater impact on the profitability of an AD project than capital expenditures.

When designing and investing in anaerobic digesters experience tells that it is most important to keep maintenance costs low and avoid costly downtime. This point appears most often to be lost on digesters installed by dairy farmers on livestock farms for biogas plants to be fed by dairy manure.

The bottom line is that, yes, AD systems are an expensive piece of technology.

However, for most AD projects, the capital cost of the core AD unit is a minor concern in comparison to the capital and operating costs of a project's biogas utilisation. Finding alternatives to steel and concrete tanks, or shortening the processing time, do not make a significant difference in the long term profitability of a project.

Second, recovering value from non-energy co-products (e.g., fibre, nutrients, carbon credits) is important and can often mean the difference between a profitable project and one that is not. This suggests that the potential opportunities provided by carbon offset markets (or similar environmental credits) can be crucial in the development and adoption of digesters.

Finally, doing something, or anything else, with the biogas in areas with low electrical power rates (e.g., the US Northwest) can be very appealing, but it also adds additional costs and hurdles that must be carefully negotiated.

Despite a less-than-ideal market and policy environment, the US has made significant progress in the adoption of digesters in both the Northwest and the United States over the last decade.

However, the US hit a snag in the development of new projects in the period 2017 to 2022. As of 2022, it will probably be seen that uptake of anaerobic digesters increases again, due to climate change imperatives.

It's likely that the same will occur globally and we will break through the cost barrier and see another round of AD projects installed which will have positive benefits in terms of reduced greenhouse gas emissions.

Only then will we be able to put the notion that “AD is too expensive” to rest.

The reality is that, like many other investments, whether AD can be profitable in any given case is “it depends.”

The findings of renewable CNG systems that create biomethane are generally considered to be good prospects for the future.

As a result of the addition of RFS credits (RIN) to the commodity price of CNG in the United States, an AD project with this approach may yield better net returns than a baseline combined heat and power (electricity-to-grid) system. More to the point, if renewable fuel is marketed as a transportation fuel in the retail CNG market, the renewable natural gas system will be more profitable than the baseline system, whether or not environmental incentives are included.

Anaerobic digester projects can be successful in a variety of situations, but they are most profitable when they generate revenue from energy or renewable fuel, fibre products, nutrients, and carbon credits for avoiding methane emissions.

In particular, the combined income from fibre products and nutrients accounts for a significant share of the gross revenue generated by the AD project, demonstrating the importance of co-product markets in the economic feasibility of anaerobic digestion.

A considerable contribution to the profitability of an AD project is made by environmental incentives such as carbon credits for methane production and Renewable Fuel Standard credits (RIN – US). This is especially true when the project produces RNG.

Why Choose to Build and Operate an Anaerobic Digester?

An Anaerobic digester in the yard and on dairy farms is neither the cheapest way to produce renewable energy, nor the simplest to operate. For municipal solid waste, until recently it was still cheaper to send the organic content to landfill.

So why do so many people choose to make biogas?

When it comes to lowering agricultural greenhouse gas emissions, anaerobic digestion (AD) combined with methane capture and conversion is the most straightforward and bankable option to go net zero. Not only net-zero you can go better than that with this renewable energy and start to reduce the carbon dioxide in the atmosphere.

In fact, it is the only agricultural carbon reduction technique that has gained widespread acceptability in a wide range of voluntary and mandatory carbon mitigation measures, including the Kyoto Protocol. Agrarian carbon sequestration is, in some ways, the closest thing to a “magic bullet” carbon mitigation strategy that exists in the agricultural sector.

In the autumn of 2021 and the quadrupling in the price of natural gas globally, the demand rises again after the covid pandemic will, if sustained, drastically improve the profitability of all anaerobic digesters. That will be excellent news for the biogas industry and not least for greenhouse gas reduction. 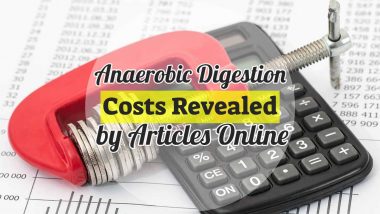 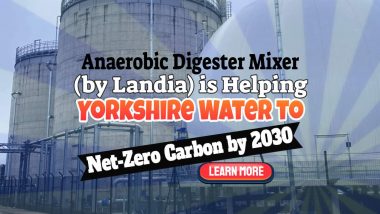