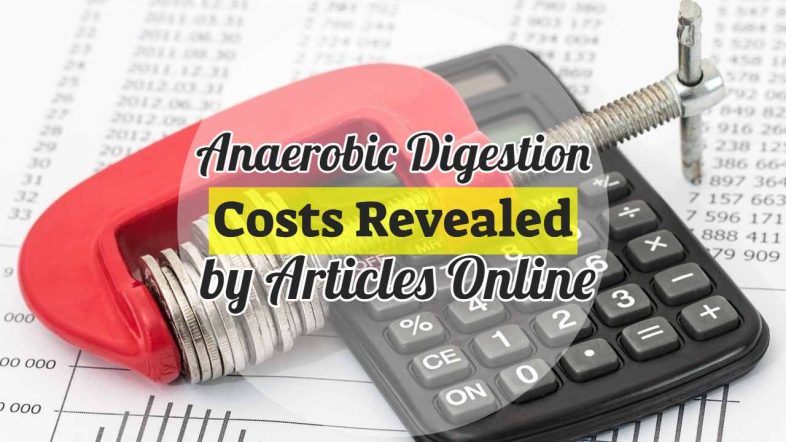 It is clear that a lot of you want to know about anaerobic digestion costs. That biogas plant cost information is being eagerly sought isn't surprising. It's understandable, anyone who might consider investing in this technology, is obviously going to ask;

“If I had an AD plant. How Much would it cost?”

We guess that a large number of people would like to know the costs of biogas energy production such as the:

This would go a long way to answering the big question about profitability.

Sadly, this cost information is usually considered to be commercially sensitive, and rarely if ever published in the public domain.

However, the good news is that we did find the following “costs information” as described in the article excerpts below. (Please visit the original websites to view the full articles):

Waste Not, Want Not – How Anaerobic Digestion Can Lower the Cost of Running a Farm

Although the cost of an anaerobic digestion plant is high, by using your farm waste to generate heat, electricity and biofertiliser, you’ll save money in the medium to long term and open up new income streams.

More and more farmers are using anaerobic digestion to turn their farm wastes into energy, cutting their own energy costs and attracting additional subsidies. Some are even selling the electricity to the national grid – and see the investment as more secure and profitable than expanding their herds.

And if that’s not enough, anaerobic digestion also creates a nutrient-rich biofertiliser which studies show works better than chemical-based ones alone. via Waste Not, Want Not – How Anaerobic Digestion Can Lower Input Costs

Many of the upfront costs of constructing an anaerobic digester might be covered by grants or low-interest loans. However, before making such a huge initial expenditure, it is necessary to analyse an anaerobic digester's net operational expenses. Before developing or purchasing an AD plant, it is vital to do a thorough financial study. 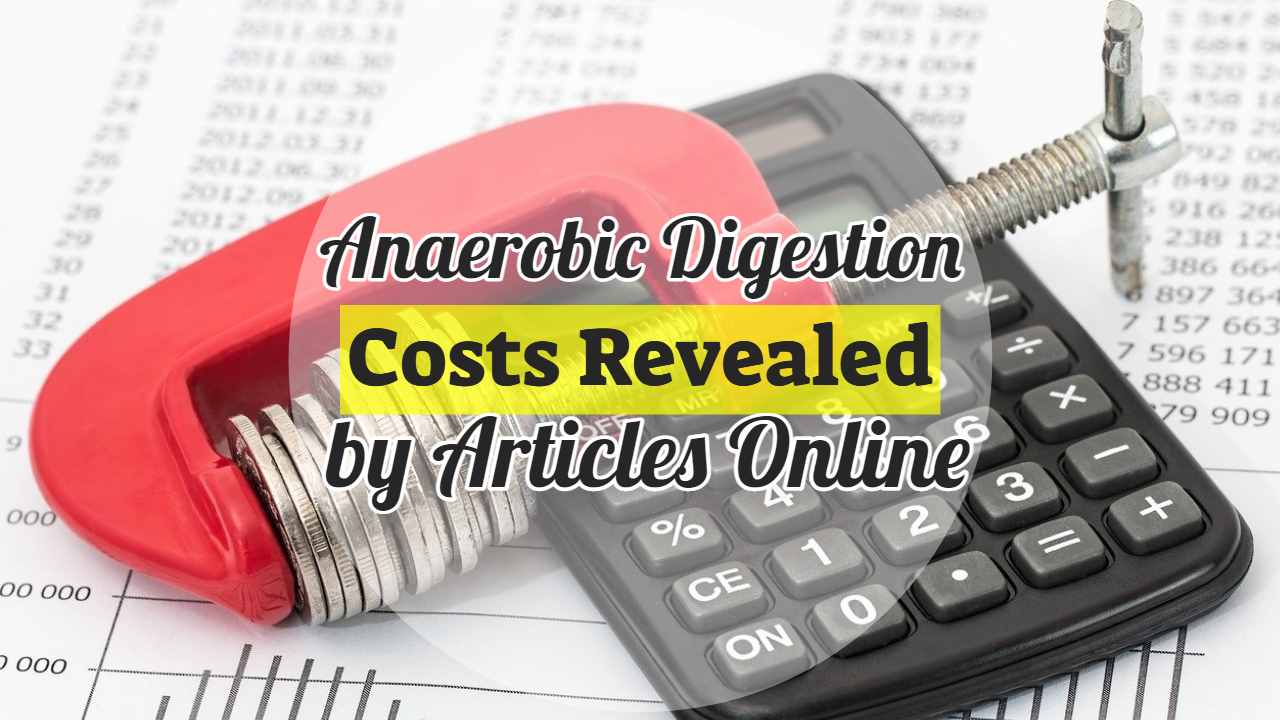 The maintenance costs of operating an AD plant varies depending on its scale, ranging from $18 to $100 per tonne of feedstock processed. According to a study of 38 AD systems in the United States, the equipment for power generation accounts for about 36% of the overall capital cost.

The cost of electricity generation, generating power with AD plants ($/kWh) ranges from $0.06 to $0.23. The cost of producing energy is determined by the type of AD plant and the feedstock used.

Electricity generation cost is usually lower for larger plant sizes due to economies of scale.

We made the video which follows to highlight the availability of costs information in an EU publication published in 2015. The information on the costs of case studies, construction costs, and payback times may not be as up to date as we would like.

Nevertheless, this is a rare document as it does contain information on the costs of these smaller AD plants, and likely revenues.

The on-site bio-energy plant was designed and built by Clearfleau for a food sector client. That client was, global food and beverage supplier Nestlé's Fawdon confectionery factory, near Newcastle. The financial and environmental benefits from Clearfleau's food waste plant are contributing to Nestlé's efforts to develop environmentally-sustainable manufacturing at Fawdon, as a beacon site for the overall organisation.

One year after commissioning, the plant is converting 200,000 litres per day of feedstock into renewable energy. This feedstock includes wash waters from the site and 1,200 tonnes of residual bi-products and ingredients per annum.

The biogas produced is fuelling a combined heat and power (CHP) engine, which produces 200 kW of electricity, used in the confectionery production process.

This is about 8% of the factory’s power requirements, cutting the annual electricity bill by about £100,000 per annum. In addition, the site has registered for the Feed-in Tariff and will receive annual payments of about £250,000 per annum.

Small energy generators (such as those with an anaerobic digester) may, according to their utility company's metering capability, offset their energy usage costs by producing their own electricity under some utilities' “net metering” regulations. For small scale biogas plants, this can significantly reduce the farm's energy costs.

The following are 2 things to think about when it comes to the energy input which is sacrificed to keep the AD plant running.:

…The payback period on Nestlé's investment in Clearfleau ‘s AD plant is predicted to be four-five years.

“Clearfleau was delighted to be selected by Nestlé to deliver this important plant and we very much appreciate their collaborative approach to the delivery of this project. For Nestlé, what was previously a processing overhead is now a valuable financial and environmental asset.

“The advantages of anaerobic digestion are becoming more apparent and we are currently building AD plants on dairy, distillery, food and biofuel manufacturing sites. As a consequence of this industry support, we have built a strong team delivering on-site anaerobic digestion facilities.”

The Cost of Renewable Energy Spreadsheet Tool (CREST) is a collection of economic and cash-flow models for evaluating project economics, designing cost-based incentives, and assessing the impact of state and federal renewable energy support mechanisms.

It includes a spreadsheet for calculating anaerobic digestion costs.

The model is the result of a collaboration between NREL, the Solar Energy Technologies Office of the US Department of Energy, and the National Association of Regulatory Utility Commissions in 2009–2010. Sustainable Energy Advantage developed the model under the direction of NREL.

State officials, regulators, utilities, developers, and investors will benefit from CREST. Users can utilise the models to:

CREST can be downloaded here.

The CREST models are available in Microsoft Excel format:

The following sections were added in 2016:

The [UK] anaerobic digestion (AD) industry outside of the water sector has grown by over 600% in the past five years, partly thanks to innovation from world-class UK researchers. ADBA has appealed for academia to focus their current efforts behind delivering major waste management improvements which would put the cost of AD on par with the cost of energy from Hinkley Point C.

The call came at ADBA’s 2-day Research & Innovation Forum 2016 in York last week (April), which centred on industry efforts to drive up operational efficiency and drive down costs.

As incentives fall, academia will be instrumental in working in partnership with the AD industry to ensure UK operations continue to thrive while we position ourselves as world leaders in a global biogas market worth billions.

“With ever limited support from the government, therefore, the AD industry is seizing the initiative by challenging the expertise of the UK’s world-class researchers to help find innovations which will revolutionize performance even more.

“Such as new sources of input, improvements in operational performance, more valuable outputs, to reduce the overall cost of production.

“During our annual Research and Innovation Forum this week, which brings together academia and businesses to collaborate on key AD priorities, we unveiled our Cost Competitiveness, Task Force.

“With the right support, this body aims to establish the means by which industry can reduce the cost of producing its energy by at least five per cent each year between now and 2020.”

If the AD industry is to reduce ‘levelised costs’* to £100/MWh by 2020, then five key elements will be instrumental in reducing costs to par with new nuclear: …

‘Levelised costs’ represent the cost of generating, over the lifetime of a project, each MWh of electricity. So improvements in operational performance can be as important as any changes in cost. via Farming UK News – AD industry unveils cost competitiveness task force

And for international readers, we have the following excerpt and offer of a pdf to download on the subject of AD costs:

Does an anaerobic digester cost too much?

… Unfortunately, I can’t say we have the answer to how to make digesters really cheap or the revenues really valuable. However, after 10 years of research looking at virtually every idea, we now have a very convenient resource that helps to characterize the costs and revenues of an AD system. 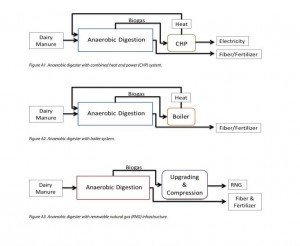 Via the Center for Sustaining Agriculture and Natural Resources via Does an anaerobic digester cost too much?
Many of the upfront costs of constructing an anaerobic digester might be covered by grants or low-interest loans. However, before making such a huge initial expenditure, it is necessary to analyse an anaerobic digester's net operational expenses. Before developing or purchasing an AD plant, it is vital to do a thorough financial study.

We recommend that you visit Washington State University at the link below.

Read their instructions and fill in the figures to get the cost information you seek. 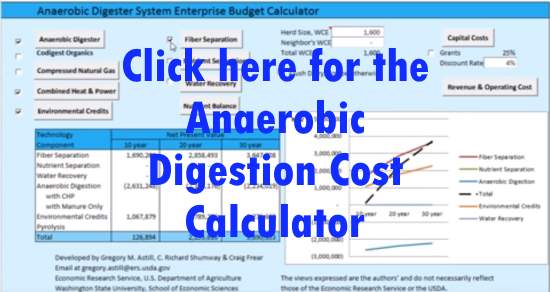 We hope that this article provided you with valuable information on anaerobic digestion plant costs, or provided a link to a website that was helpful.

Do you think that AD is too expensive?

We would welcome your comments below.

If after reading this page you still seek more cost information, we are consultants who for a fee will work with you to estimate the cost of any AD plant. 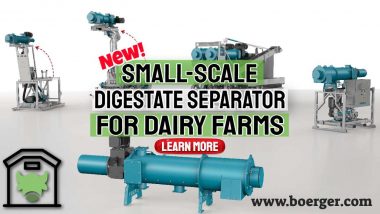 Anaerobic Digestion Cost – Plus Gate Fees and Other Rules of Thumb