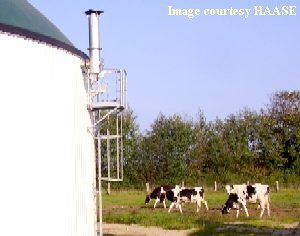 Anaerobic Digestion of Biomass and Using Silage as a Feedstock

The anaerobic digestion of biomass is destined to become ever more popular as the world strives to find sustainable methods.

The subject is extremely wide, and encompasses the full scope of the feed materials used for anaerobic digestion. By definition “biomass” is: “biological material derived from living, or recently living organisms”.

However, in the context of biomass for energy this is often used to mean plant based material. So, for the purpose of this page we have limited our subject matter to plant based material. But, to be absolutely correct, all our readers should remember that in its general usage biomass can apply equally to both animal and vegetable derived material.

[box type=”alert”]This page is all about the Anaerobic Digestion of Plant Based Biomass as used by the energy industries, and does not cover animal derived material. It excludes organic material which has been transformed by geological processes into substances such as coal or petroleum.[/box]

Much biomass comprises biodegradable wastes which have a high cellulose content, such as wood and other high calorific value materials that only slowly biodegrade. These are usually best utilized when burnt directly as fuel. Only the softer, greener higher water content organic materials are well suited as biomass for anaerobic digestion.

Silage Digestion as an Example of the Anaerobic Digestion of Biomass 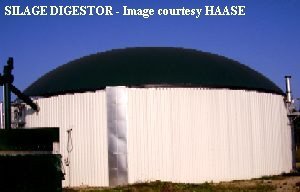 The anaerobic digestion of biomass is destined to become more popularas the woWith the increasing interest in AD from both farming and waste management interests, the use of waste biomass and to a lesser extent from food crops as a feed which will be a primary feedstock (probably mixed with other crop feedstocks) for Biofuel AD Plants.

Silage biomass can also be valuable to be held in a silage clamp, effectively as a fuel store to provide a reserve of feed material, as a strategy to ensure adequate feedstock availability for plant operation, during seasonal feedstock scarcity.

Cultivation, harvesting and treatment of ley crops is certainly a strategy adopted in certain Scandinavian countries which create biofuels from the anaerobic digestion of biomass, and at least one MSW plant in these nations also uses silage in this way.

Silage is readily stored, and if there is adequate land available on-site storage can be held, making it an available feedstock during bad weather conditions and in northern climates, even during periods when highways become impassable.

Silage is very easy to store for the anaerobic digestion of biomass, in conditions in which it will be preserved, and not rot away while AD plant power generation demands rise, for example seasonally – in winter.

Silage can be provided, under contract, by partner farms which can also also contracted in advance for the cultivation of ley crops, to be used for biogas production.

The leys are allowed to lie for two or three years and a high percentage of clover (in the region of 25% of the seed) is included in the mixture. This provides nitrogen fixing for to the intended improvement of the soil structure and the gives the farmer the additional (or primary) value of ley as a preceding crop within the rotation. 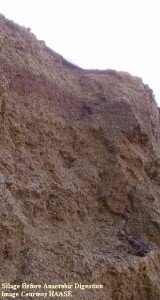 As such, the leys are a part of the normal crop rotation of the farms.

[box type=”tick”]According to the present rules for EU-subsides the ley may be cultivated on land that is set-aside. (Please check this as this may change with time.)[/box]

The ley is also undersown, either in a cereal crop, or in spring oil-plants.

Undersowing, fertilising, and management are carried out on the farm in accordance with the requirements given by the Anaerobic Digestion Plant operator, who will seek to maximise calorific value in the feedstock etc, to suit the AD process in the plant.

Harvesting is done at the same time of the year as for “normal”, large-scale silage-making of ley crop for cattle.

At harvest, the crop is wilted and finely chopped with a precision chopper.

In order to achieve high efficiency, minimise costs and to obtain a substrate that has the intended properties for digestion, the harvesting is also often organised by the anaerobic digestion plant operator, using specialist agricultural contractors.

The crop is preserved in the normal way as silage in plastic bags.

The silage is taken out from the bags by a wheeled loader and is transported to the biogas plant as required, and for some biogas /biofuel plants this may be done continuously throughout the year.

One such example is the Svensk Vaxtkraft, Anaerobic Digestion Plant where the Contractor is Ros Roca International www.rosroca.de ,

HAASE also supply a system for Silage Digestion. The images show the HAASE silage digester located near Neumünster in Germany.

Unless you work in the energy sector, or have always been interested in alternative fuels, it is entirely understandable that you might not have heard of the term “biomass”. Until about five years ago the idea was seldom considered.

But, things have changed since that time (the early 2000s). Society was not as aware then as it is now that the earth’s stored fuel resources will one day run out. Nor had they foreseen quite how fast the cost of traditional fuels would rise.

These are the reasons for the new interest in alternative renewable energy sources many of which are extremely under developed at present (for example Anaerobic Digestion).

Conclusion – The Future of the Anaerobic Digestion of Biomass

Renewable energy sources, other than small current contributions from tidal energy and nuclear energy, must ultimately use the stored energy of the sun through photosynthesis, instead of fossil energy.

Nothing other than renewable energy has been used on earth, since the higher orders of life evolved on earth.

Man is searching for alternatives to using stored energy from fossil fuels, and in so doing has come up with the concept of the “anaerobic digestion of biomass”. The scale of using biomass is significant:

“The potential to generate energy from currently available major [biomass] feedstocks in the world is 10,100 to 14,000 TWh.

When used as electricity, it has the potential to meet 16-22% of the electricity consumed in the world. This has the benefit of displacing fossil fuel-based energy with low carbon, renewable energy and also abatement of greenhouse gas emissions.”