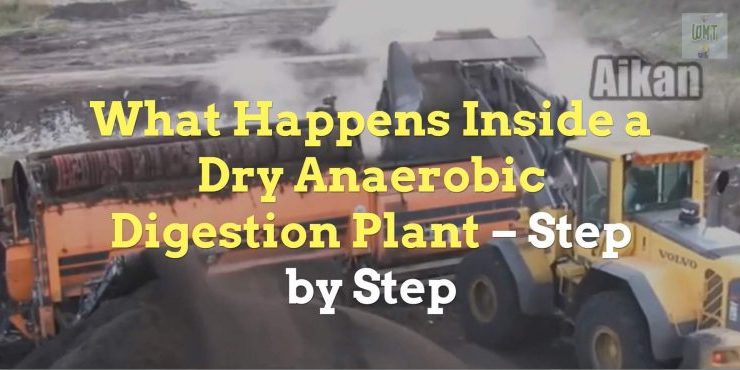 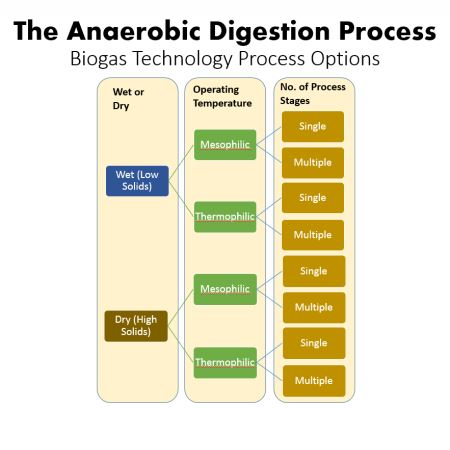 In Wet AD processes the organic matter, whether a solid such as a natural fibrous material, or a liquid, is digested as if it was a liquid (as a mixture, mash, or slurry).

In Dry AD processes the handling of the substrate is by mechanical handling (front-end shovels etc) in batches, whereas in Wet AD systems the substrate (containing solid fibres and dissolved organic chemicals) is pumped. All common Wet AD processes are continuous, and in contrast to Dry AD are not normally batch processes. The exception to this for Dry AD are the proprietary systems such as Dranco, Kompogas and Linde which are generally classed as continuous plug-flow type reactors.

During Dry AD a portion of the liquid digestate from the previous batch is recirculated, which when applied to the incoming pile of Dry AD substrate, soaks in. The digestate contains anaerobic organisms which seed the biomass. Seeding accelerates decomposition through the action of methanogenic organisms, resulting in the production of biogas.

Whereas in Wet AD systems the feed material is pumped into the existing substrate in the reactor and mixed with mechanical stirrers or mixers, where it is digested by the methanogenic micro-organisms.

Many Dry AD systems are similar in design to in-vessel composting plants, but instead of there being an ample warm air-supply to encourage aerobic composting, there is no air oxygen provided, and the Dry AD vessel is sealed from air-ingress throughout the process.

October 2011 – Linde may no longer be trading or may have been bought out. If you know about Linde, use our contact form to update us please.

Linde states that it can be operated in thermophilic or mesophilic mode and has been developed for the anaerobic treatment of solid substrates with dry matter (TS) contents between 15 and 45%.

The digestion principle is based on a plug flow reactor principle, which has a horizontal orientation.

The most outstanding feature of this dry digester is that it is constructed as a horizontally arranged unit within a concrete tube which looks similar in scale and geometry to common aerobic in-vessel composting designs. This is reported to give it extreme “sturdiness”, which might also be described as “robustness” and “high reliability”, we assume.

Within the essentially plug-flow reactor vessel, several electric motor-driven agitators are aligned externally with their drive shafts perpendicular to the sidewalls and arranged in series along the length of the vessel.

This method of mixing/agitation provides for the net horizontal plug-flow movement, gradually toward the discharge end from the fed hopper/tank, and the use of these mixers is reported to prevent the formation of floating scum and settlement of material, with a high degree of reliability.

A sturdy conveyor frame is fixed to the digester bottom which will reliably transfer the sediments to the fermenter discharge.

All components such as the feeding unit, agitator drive units, digestion residue discharge units, and the gas system are easily accessible for maintenance and normally installed in individual housings.

The organic material treated is fed into the digester by a compact feeding unit. If required, the TS content in the input is adjusted as desired at the same time.

At the digester end the digestion residue is discharged from the reactor through a low-wear (and presumably low maintenance discharge system.

The following features and advantages over other systems are reported by Linde:-

The information on this page was provided courtesy of Linde. July 2011 – 2014 – The Linde website was no longer available in 2019.

Dry anaerobic digestion until recently in reality actually meant “high solids” anaerobic digestion. The expression “dry” simply indicated that the water content was lower than for the traditional AD plants used for farm slurries/ manure, which has historically been “very low solids” systems. All these systems relied on water and pumping for conveyance. An essential requirement for good biogas yield within the shortest time is that the fermenting substrate is mixed to ensure that the methane-producing (methanogenic) bacteria are exposed to the food they need throughout the tank. Those dry AD systems that don't include mixing need longer residence periods than normal wet AD systems.

Some authors on this subject refer to dry AD as being “Solid-state anaerobic digestion (SS-AD)”.

The wet AD systems are continuous process flow systems. Dry AD systems may be either continuous or batch processes and may be operated in the temperature ranges of mesophilic or thermophilic AD systems.

However, during the period 2000 to 2010, truly “dry” (two-phase) anaerobic digestion systems have also been developed which resemble in-vessel composting plants, where the organic waste is transported in the buckets of front-end loading vehicles.  In such “dry” systems the use of water as the means of conveyance through the process is abandoned. Instead, recycled digestate is usually sprayed onto the substrate of organic matter and mechanical mixing using rotating blades may or may not be provided.

Water-based systems can be thought of as within the following dry solids range:

The solids contents referred to here are higher than much of the literature states elsewhere, due to recent improvements in pumping and mixing technology. Always check actual solids capabilities with the manufacturer of proposed equipment for any design work.

SS-AD  is good for the organic fractions of municipal solid waste and substrates such as crop residues and bio-energy crops. Proponents of SS-AD suggest that smaller reactor capacity requirements are possible, and less energy is used for heating. 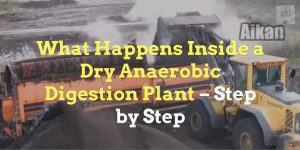 In addition, there is no energy consumed for stirring. The digestate volume from SS-AD is lower which makes it much easier to dispose of when land application for fertilizer sales is ruled out by the presence of heavy metals and other unacceptable contaminants, than the effluent of liquid AD.

But, as we have already hinted, SS-AD systems are also burdened by other disadvantages such as larger amounts of required liquid suitable for re-injection for inoculation of the substrate, and a much longer retention time.

The best known brands in “dry” anaerobic digestion are Dranco, Kompogas and Linde. However, Linde was not thought to be still trading in this product when this article was updated (November 2014).
SMARTFERM is a company that is a newcomer with a dry anaerobic digestion system for organic waste processing. It uses the term “dry fermentation” to describe its process, which involves the production of biogas from stacked solid organic waste in a non-continuous batch process.

This article was originally posted in its current format, in November 2014, and was revised, updated, and re-posted in December 2019.