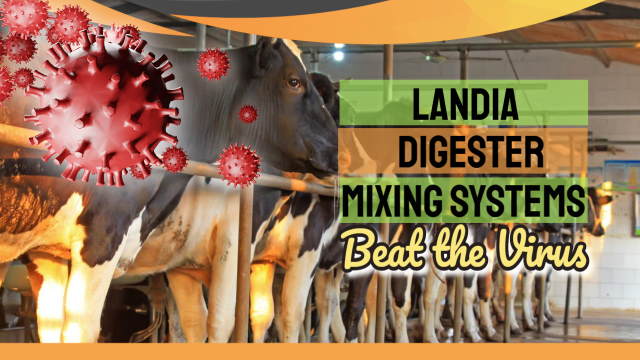 Undeterred by the current coronavirus wave hitting the UK and many other nations (possibly including China as well) we are pleased to report that Landia Digester Mixing Systems are once again beating the many problems caused by the coronavirus pandemic and are going ahead in China in what appear to be more and bigger orders than previously seen.

This latest contract in China for Landia follows several important orders for its wastewater pumps and mixers, including the Dalian Xinjiang sludge treatment project, and the Matougang sludge handling facility in Zhengzhou.

As in an increasing number of nations, the Chinese government authorities are increasingly aware of the many benefits of the anaerobic digestion process both to reduce climate-changing carbon emissions and to raise the sustainability of agriculture for continuing increases in food production.

China has always done well through the introduction of low-tech small scale biogas plants. This news of multiple Landia Digester Mixing Systems being applied is welcome evidence that they are moving now to the larger and more sophisticated application of the anaerobic digestion process, at the scale needed for commercial farms.

In Luannan County, which has been committed to significantly developing agriculture in China, Landia has secured a major new order for its biogas digester mixing system.

Approximately 250 km east of Beijing, Luannan County is already generating a total annual value of more than 3 billion yuan ($446 million) from about 13,000 hectares of land – and with growing demand from the Chinese for dairy products, Landia’s GasMix system will be installed on six digesters (7,500 m³), utilising sand-laden chicken manure and cow manure as primary feedstock.

From milk production that was almost zero back in the 1970s to today, close to 40 million tonnes annually, China is now the world’s fourth-largest milk producer – also seeing greatly increased consumption of meat, eggs and cheese.

Externally-mounted so that no moving parts are inside the biogas digesters, a total of 24 GasMix units are to be installed – each benefitting from the evergreen Chopper Pump invented by Landia in 1950.

“In the continuing development of agriculture in Luannan County to help China become less dependent on food imports, it is notable that the Chinese are also looking at every possibility of investing in renewable energy. They understand the long-term benefits of equipment that is highly efficient as well as being extremely durable”.

This latest contract in China for Landia follows several important orders for its wastewater pumps and mixers, including 22 pumps and mixers for the Matougang sludge handling facility in Zhengzhou – plus the Tianjin South Sludge Treatment Plant, for which a total of 18 Landia Chopper Pumps were supplied.

In April 2014 Landia supplied a GasMix digester mixing system for the Bioenergy Research Institut, Nanjing University of Technology. The Landia Digester Mixing System was their choice for their scaled-up 300 m³ research digester.

There are 3 main benefits of using the Landia Digester Mixing System, these are:

The manner in which it works is innovative and ingenious, but in essence, the clever combination of water and biogas in the jet of flow produced provides much better mixing than either on its own. Jens Henry Christensen was able to save energy by switching off the GasMix unit during the daytime.

At Downers Grove Wastewater Treatment Center in Illinois, the Landia GasMix digester mixing system was reported to have increased biogas production by approximately 20%. Two years after it became the first municipality in North America to introduce Landia’s GasMix technology, plant operators at the center no longer have any need to flare off any gas. Furthermore, this mixing unit provides optimum mixing with the lowest possible parasitic load because it only runs for just 12 minutes per hour.

A thick floating layer of crust that was reported to be limiting biogas production for a Danish pig producer until Landia’s mixing system was deployed and solved the problem.

How a Landia Digester Mixing System Boosted Biogas Output by 20% 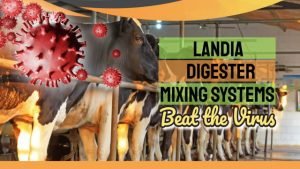 The system employs an externally-mounted chopper pump which draws thick liquid from the bottom of the tank and chops up any solids. This liquid is then mixed with biogas aspirated from the top of the tank, and reinserted into the tank’s upper half. A second stage of the mixing process then sees liquid injected into the lower half, meaning liquid and gas continue to circulate throughout the whole digester. It is assumed that this provides a high degree of mixing sufficient to raise output by 20%.

A University of Aarhus Study also revealed that viscosity was being decreased by more than 31% when GasMix was used in a heat exchange tank treating agricultural residues prior to anaerobic digestion.

Milton WWTP staff used the GasMix system to optimize the plant’s operation by providing superior mixing and reducing staff time associated with dewatering and have suggested that compared to aerobic wastewater treatment, the low-rate reactors produce approximately 60% less sludge. This, in combination with biosolids drying, has drastically lowered sludge disposal costs and saved valuable landfill space – as we reported in a previous Landia Press Release. 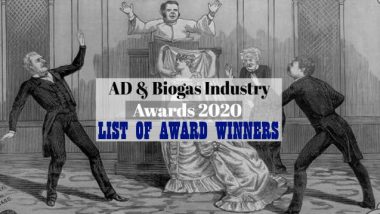 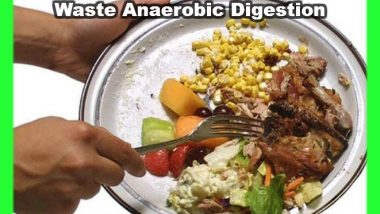 Anaerobic Digestion of Kitchen Waste – All You Need to Know