The City of Perpignan is the first in France to benefit from a Clarke Energy Biogas Upgrading Plant at their WwTW (Sewage Works or “STEP”). The plant will allow the city to make the most sustainable use of the biogas produced, through natural gas grid-injection of the renewable gas. The gas called biomethane is equivalent to natural gas, and is produced by the new Clarke Energy upgrading (raw biogas purification and compression system) at the existing biogas plant at the city's sewage works. 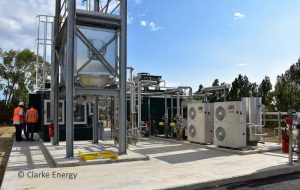 The Biogas Upgrading Plant provided by Clarke Energy. – Click on image to enlarge.

Clarke Energy is a growing multinational specialist in distributed power generation solutions. With their international headquarters are located in Knowsley, near Liverpool, they have been well-known in the UK biogas sector for many years. Although now part of the Kohler organisation, most in the UK waste management sector will remember the origins of Clarke Energy in landfill gas (LFG) utilisation. In particular for the installation of reliable gas engines at an early stage of LFG utilisation in the UK when many were hit by problems with silica and corrosion caused by impurities in the landfill gas.

Their capabilities now range from the supply of gas fuelled power generation engines, through to the turnkey installation of a multi-engine power plants. Clarke Energy is an authorised distributor and service provider for Jenbacher reciprocating gas engines and known for their strong focus on after-sales support.

The following is a copy of their recent Case Study, and notable “first” for France: 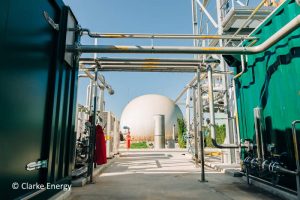 The membrane treatment technology used upgrades biogas produced from sewage to biomethane and this is the first in project in the French region of Occitania and the Mediterranean Arc.

The City of Perpignan decided to upgrade its biogas from sewage treatment plant sludge, to produce biomethane, a renewable gas with the same characteristics as natural gas. Perpignan placed a call for tender for the project, which Clarke Energy replied with a membrane purification platform.

The turnkey biogas upgrading solution installed by Clarke Energy provides treatment, preparation and purification of biogas, guaranteeing a purification rate of 99% and a CH4 rate of 97%. The first cubic metres of biomethane have been injected into the GRDF network and the unit can provide the equivalent of the annual consumption of 1,200 homes.

187Nm3/h of biogas are: dehydrated, desulphurised, filtered, compressed and finally purified; allowing a production of 122 Nm3/h of biomethane. This renewable gas, which meets GRDF requirements, is then injected on the distribution network.

Perpignan entrusted the maintenance of the biogas upgrading plant to Clarke Energy and the operation to Véolia, for a extendable period of 5 years. Clarke Energy are committed to a strong performance guarantee and service availability, with the facility being supported by remote monitoring, facilitating the highest levels of availability from the platform and gains in operating costs.

View all posts by biogasman →

A Biogas Heating System 101 – Boiler Technology, Options and Benefits
Anaerobic Digestion vs Landfill – Which is the Best?

Explore More of this Site:

Affiliate Disclosure: IPPTS Associates is a participant in the Amazon Services LLC Associates Program, an affiliate advertising program designed to provide a means for sites to earn advertising fees by advertising and linking to amazon.com.

Free Newsletter Sent to You Whenever we Post a New Blog Article!