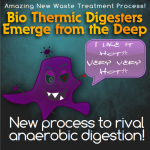 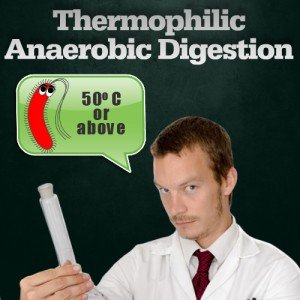 What is Thermophilic Anaerobic Digestion?

It is all about temperature. Anaerobic digestion (AD) will take place at any temperature above about 10 degrees C, but only very slowly. Over the years research has established that there are two temperature ranges which are the most efficient for biogas production using the normal bacteria and other synergstic organisms which contribute, which are the most efficient for the process and for biogas production.

“A thermophilic digester or thermophilic biodigester is a kind of biodigester that operates in temperatures above 50 °C producing biogas. … In fact, it can be as much as six to ten times faster than a normal biodigester.”

For most digester feed materials, both mesophilic and thermophilic anaerobic processes will work. Mesophilic digesters (33-35 °C) are normally designed for retention time of 20-30 days, while operation in the thermophilic range (53-55°C) enables the retention time to be as low as 10-12 days.

In our experience those benefits vary according to the type of material which is digested. Municipal Solid Waste lyses (breaks down within the cells) relatively easily when compared with, for example, sewage sludge. So, while thermophilic anaerobic digestion is becoming the norm for sewage sludge, it is unlikely that the additional sacrificial burden on heating the reactor will be worthwhile for MSW AD in most cases.

The hydrolysis stage of the AD process is widely regarded as a rate-limiting step in sludge digestion, thus improvements in hydrolysis rates which occur naturally at higher temperatures have the potential for significant improvements in overall apparent sludge digestion rates. Therefore, many “optimized” thermophilic reactors operate right at the top of the thermophilic temperature range. At this point the naturally occurring methanogenic bacteria begin to be come less efficient, so any further increse in temperature tends to reduce efficency and not raise it.

Improvements in the rate of the AD process, at thermophilic temperatures, have beneficial knock-on effects as they also lower mixing energy requirements, maintenance of mixing equipment, and overall heat loss per unit volume of material processed which also reduces costs. But, more energy is consumed to raise the temperature initially, and for high rates of throughput this can be significant.

Also, when a reactor is initially commissioned from cold on a new site, the entire reactor must be heated to the higher thermophilic temperature range largely using “bought in power”, normally from the local electricity provider, adding to the initial invetsment needed to start-up a new biogas plant installation.

Some researchers have reported that they have been able to reduce the hydraulic retention time (HRT) from a necessary 15 to 20 days in mesophilic digestion down to as little as 3 days at a thermophilic temperature in the region of (55°C) with stable fermentation and methanogenic activity. That is an illustration of just how much an effect the temperature of an AD plant reactor can have, but for reliance on the lowest possible hydraulic retention time any AD facility developer would need to be very confident in their ability to keep the system stable in operation as there would be very little time to react if the eractor started to experinece problems. Loss of reactor up-time while high rate reactors can be teased back into full health, can be very costly and all decisions on optimizing throughput need to balance economy of initial capital spend, and robustness in plant operation throughout its life.